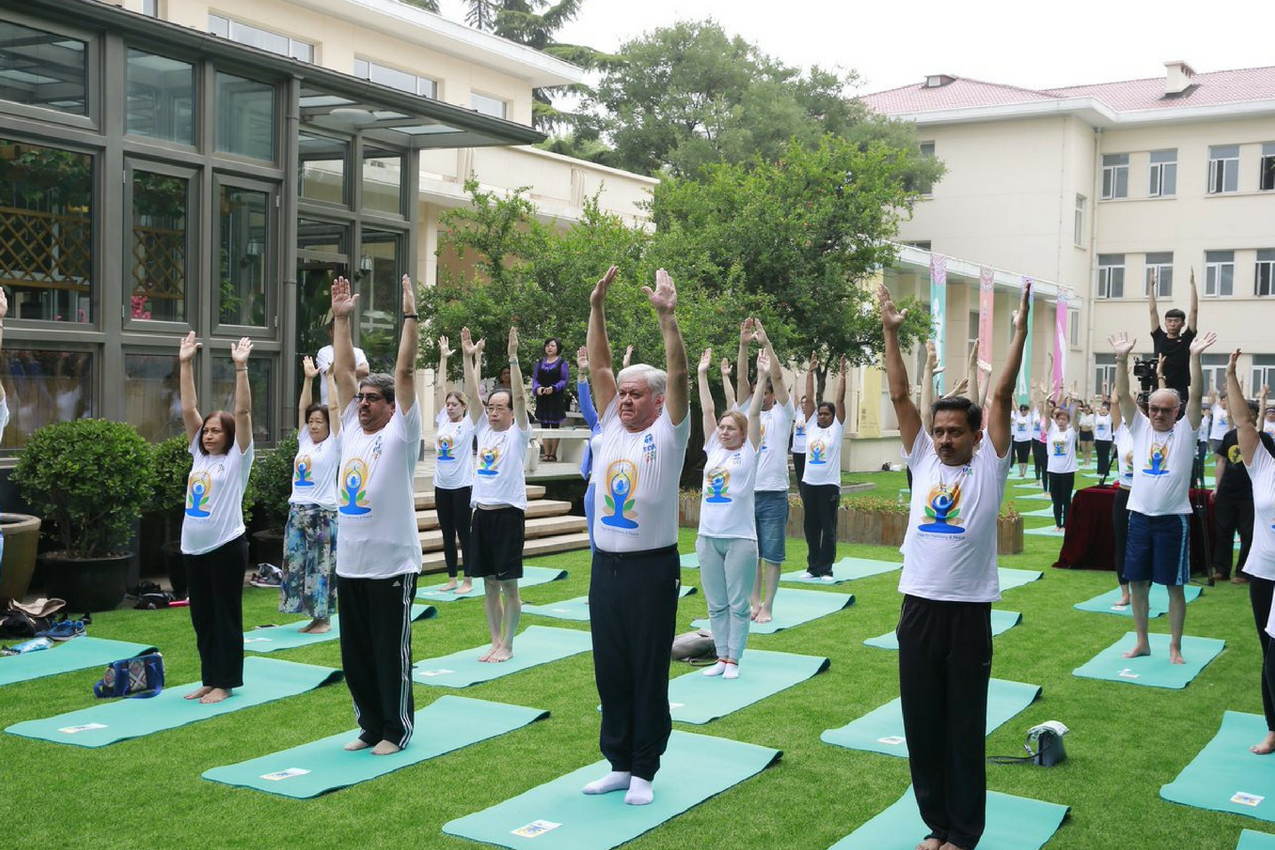 Since the UNO declared 21st of June as the International Day of Yoga in 2014, the Shanghai Cooperation Organisation (SCO) headquarters celebrated Yoga Day for the first time on the 16th of June, marking the beginning of this year’s International Yoga Day celebrations in China.

China has a huge Yoga following and celebrates the day every year with massive gatherings. This was, however, the first time that the event was held at the SCO’s headquarters.

Joining SCO Secretary General Rashid Alimov, the Indian Ambassador to China Gautam Bambawale and his wife Amita Bambawale, were diplomats from several other countries as well as Chinese yoga enthusiasts, who took part in this event.

Alimov, a Yoga enthusiast himself, thought of organizing the event when he visited the International Yoga Center in Delhi a few months ago, when he went to invite Prime Minister Narendra Modi to take part in the SCO summit being held in June.

“After the visit to the International Yoga Center, I promised to myself to organize the Yoga Day at SCO headquarter. Today we are very happy about it. We did it. I was little bit nervous about participation as it was a Saturday. We prepared 100 places, but more than 150 turned up,” he said.

The participants are from different nations, cultures, and ages. Yoga invited them to be together, Alimov believes.

“What it means is, Yoga represents the Shanghai spirit. The Shanghai spirit and Yoga spirit are the same. It means people must be together without national and political differences,” Alimov said, adding “Yoga is one of the symbols of uniting people, who wants to preserve spiritual and physical health”.

Indian Ambassador Bambawale, in his address, said India’s Yoga techniques have proven extremely important in ensuring a healthy and fulfilling life for millions across the globe.

“Yoga schools have sprouted all over the world including in the SCO countries. The practice of Yoga and its benefits are becoming apparent to people in every corner of the world, including here in China where we even have an India–China Yoga School at the Yunnan Minzu University in Kunming,” he said.

Mohan Singh Bhandari, the founder of a popular Yoga institution in China — Yogi Yoga, conducted the exercises for this occasion at the SCO headquarters.