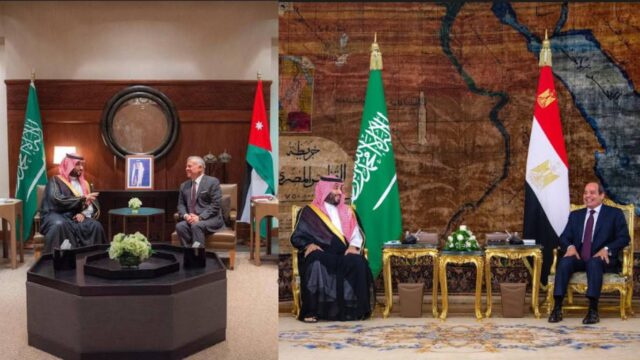 Crown Prince of Saudi Arabia, Mohammed bin Salman arrived in Cairo for his three-leg regional visit. In Cairo, he held bilateral talks with President Abdel Fattah el-Sissi. Both leaders discussed a wide arena of topics, including ties between the two countries and President Joe Biden’s Middle East visit next month, according to el-Sissi’s official statement.

All the deals include a $1.5 billion deal between Saudi Arabia’s Acwapower and Egypt’s state-run electricity company which will be utilised to build a wind power plant.

Saudi Crown Prince, Mohammed bin Salman met with Jordan’s King Abdullah on Tuesday, 21st of June, 2022 as part of his second visit in the three-leg regional visit. This is Crown Prince’s first visit to Jordan in years and it has come at a time when Jordan’s economy is struggling with the impact due to the ongoing conflict.

The sovereign wealth fund of Saudi Arabia, the Public Investment Fund (PIF), is looking forward to investing billions of dollars in mega-infrastructure projects in Jordan, including an estimated $2.5 billion railway project, a senior Jordanian official said. It is remarkable to note that Saudi Arabia already has over $12 billion worth of investments in Jordan.

Before the talks, officials from both countries said that the discussions between the two leaders would look at more ways to help Jordan’s economy, which has been affected by the rising fuel prices and higher food imports. Most of the required energy needs in Jordan are met by the import of resources.

Prince Mohammed bin Salman was quoted as saying in a statement that he was eagerly looking forward “to push relations to a new phase.” The Prince also said that “There are large opportunities in Jordan that we are keen to actively participate in and such investments will bring benefits to both countries.”

King Abdullah also discussed with Prince Mohammed about a summit meeting scheduled for next month in Jeddah wherein the U.S. President Joe Biden will meet with leaders of the Gulf Cooperation Council as well as those of Iraq, Jordan and Egypt.

During the discussions, Saudi Arabia and Jordan also expressed deep concerns about the nuclear ambitions of Iran and what they perceive as Tehran’s destabilising role in the region, a Jordanian official said.

Saudi Crown Prince Mohammed bin Salman is scheduled to arrive in Ankara today. This is his first visit to Turkey in a long row of disruptions in the ties between the two countries. The Crown Prince is expected to meet President Recep Tayyip Erdogan in Ankara, the last leg of a Middle East tour after Egypt and Jordan.

Turkey’s efforts to enhance bilateral ties with Saudi Arabia come after an economic crunch faced by the country. Turkey has also taken steps to improve and boost relations with the UAE, Egypt and Israel.