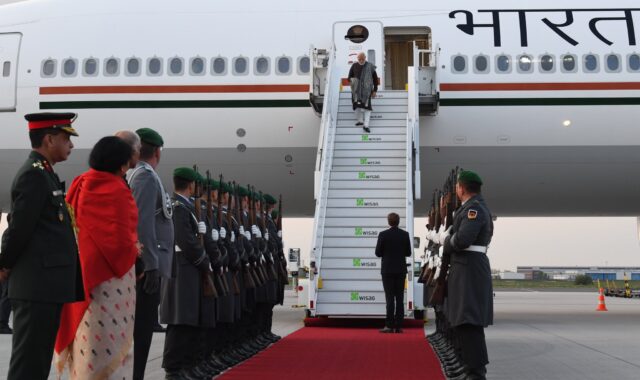 Prime Minister Narendra Modi embarked on a three-day trip to Europe on Sunday. The Prime Minister will meet with foreign leaders such as German Chancellor Olaf Scholz, Danish Prime Minister Mette Frederiksen, and French President Emmanuel Macron during his visit. It’s Prime Minister Modi’s first overseas trip of the year and his first since Russia invaded Ukraine. During his visit,  PM Modi will participate in 25 events, including bilateral and multilateral talks with eight presidents from seven nations, as well as a discussion with 50 global business executives.

PM Modi will go to Berlin on May 2 (today) at the request of German Chancellor Olaf Scholz, then to Copenhagen on May 3-4 at the invitation of his Danish counterpart Mette Frederiksen. PM Modi stated that on his way back to India, he will stop in Paris for a meeting with French President Emmanuel Macron.

“My visit to Europe comes at a time when the region faces many challenges and choices,” PM Modi said. “Through my engagements, I intend to strengthen the spirit of cooperation with our European partners, who are important companions in India’s quest for peace and prosperity,” the Prime Minister said in his departure statement.

PM Modi and German Chancellor Olaf Scholz will hold bilateral meetings in Berlin, and the two leaders will co-chair the sixth edition of the India-Germany Inter-Governmental Consultations (IGC). The biennial IGC is a one-of-a-kind debate format in which numerous ministers from both sides participate. According to officials, the IGC will give a boost to the economic and strategic alliance.

PM Modi will proceed from Berlin to Copenhagen, where he will meet with Prime Minister Frederiksen for a bilateral meeting to assess progress in India’s unique ‘Green Strategic Partnership’ with Denmark, as well as other facets of bilateral relations.

PM Modi will also attend the second India-Nordic Summit, which will be hosted by Denmark, where he will meet with Prime Ministers of Iceland, Norway, Sweden, and Finland.

“I will also participate in the India-Denmark Business Roundtable as well as interact with the Indian community in Denmark,” PM Modi said.

“During my return journey, I will stop over in Paris to meet my friend, President Macron. President Macron has very recently been re-elected, and my visit just 10 days after the result will not only allow me to convey my personal congratulations in person but also reaffirm the close friendship between the two countries,” PM Modi said.

Prime Minister Modi would “exchange viewpoints” on the Ukraine crisis, according to recently appointed Foreign Secretary Vinay Mohan Kwatra, speaking at a press conference. During bilateral discussions with European leaders, he said, energy security will be one of the main topics of discussion.