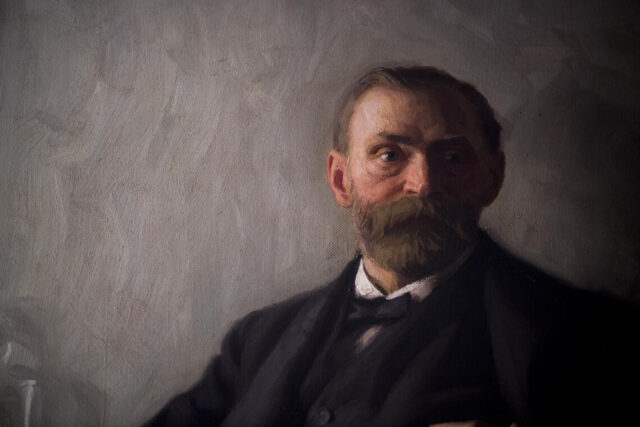 Alfred Bernhard Nobel was born on 21st October 1833 in Stockholm. The menfolk of his family were engineers and businessmen. Alfred did not attend any school yet received good education through private tutoring from good teachers. As he was good in his studies he was quick to master four foreign languages, and showed great ability in the natural sciences, especially chemistry. Over the years, he established himself as a successful industrialist and businessman, first in Europe and then in the USA. Further, in 1867, he patented the nitroglycerine-based explosive dynamite for which he received an award from the Royal Swedish Academy of Sciences. Alfred was a man who was against war and militarism so he was wanted to contribute towards settling the international conflict peacefully.  For the same purpose, he worked with Austrian author and peace activist Bertha von Suttner. As per many reports, it is said that she influenced him in such a way that it led to the establishment of the Nobel Peace Prize. He lived much of his adult life in Paris and died on 10th December 1896 at his home.

In 1896, when the Swedish businessman Alfred Nobel passed away, he left behind one of the world’s largest private fortunes. Through his last will, he declared that his fortune should be used in such a way that it benefits the whole mankind. The will also specified in which fields shall the prizes be distributed which included physics, chemistry, medicine or physiology, literature and peace and which criteria the respective prize committees should apply when choosing their prize recipients. According to the will, the Nobel Peace Prize was to be awarded “to the person who shall have done the most or the best work for fraternity between the nations and the abolition or reduction of standing armies and the formation and spreading of peace congresses.” The prize to champions of peace is to be awarded by a committee of five persons to be elected by the Norwegian Storting. Presently, the committee consists of five members including Berrit Reiss Andersen (Chair of the Nobel committee), Asle Toje (Vice-chair of the Nobel committee), Anne Enger, Kristin Clement and Jorgen Watne Frydnes.

The winners of the Nobel Prize 2021 include:

Benjamin List and David MacMillan “for the development of asymmetric organocatalysis”

Maria Ressa and Dmitry Muratov “for their efforts to safeguard freedom of expression, which is a precondition for democracy and lasting peace”