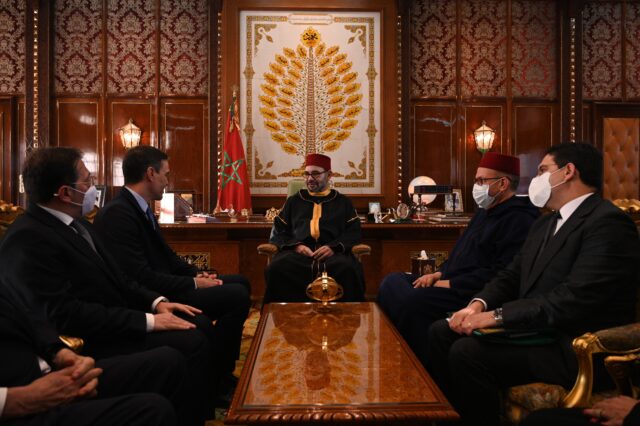 On the 7th of April, Spain’s Prime Minister Pedro Sanchez arrived in Morocco to begin a round of talks with King Mohammed VI and other senior officials. Moroccan news agency MAP reported that Head of Government Aziz Akhannouch greeted Sanchez upon his arrival at the Rabat-Sale airport. Accompanying Sanchez is Spain’s Foreign Affairs Minister Jose Manuel Albares, who is expected to hold talks with his Moroccan counterpart Nasser Bourita. Before Sanchez’s visit, Albares expressed satisfaction with both the countries’ determination to open a new phase of relations in the “best possible way.” Albares also reportedly said, “Today, I believe that not only does a crisis end, but a new stage of relations between Spain and Morocco opens in the best possible way.” After a long pause in the diplomatic ties between Spain and Morocco, the meeting came as a positive sign toward the reestablishment of diplomatic ties between the two countries. Post their Rabat meeting, King Mohammed and his Spanish counterpart, Sanchez “reiterated their willingness to usher a new phase, based on mutual respect, mutual trust, permanent consultation and frank and faithful cooperation.”

Following the ministerial meeting, Morocco resumed sea travel for passengers to and from Spain. The Moroccan Ministry for Transport made the announcement on Monday 11th of April, just a few days after a state visit from Spanish Prime minister Pedro Sanchez. The statement said that the shipping companies would resume their services between the Moroccan ports of Tangier ports and the Spanish ports of Algeciras and Tarifa. Considering that the maritime connection was closed for two years, this comes as a relief for Morocco-Spain bilateral trade and also gives way to more new opportunities in the facilitation of the trade agreements between the two countries.

Morocco appreciated Spain’s official endorsement, emphasising that this move implies the Spanish government’s clear and ambitious roadmap to improve and enhance bilateral diplomatic ties. It is, however, significant to note that the first Moroccan sign of the normalisation of relations came in August 2021, when King Mohammed VI delivered a speech commemorating the possibility that he sees in the improvement of bilateral ties. The King of Morocco also put emphasis on the working together of Moroccan diplomats along with their Spanish counterparts in a “composed, clear and responsible way” to resolve the diplomatic crisis.

The official Twitter handle of the Government of Spain later tweeted,

“This visit marks the beginning of a new stage in relations between Spain and Morocco, based on transparency, mutual respect and compliance with the agreements signed.”