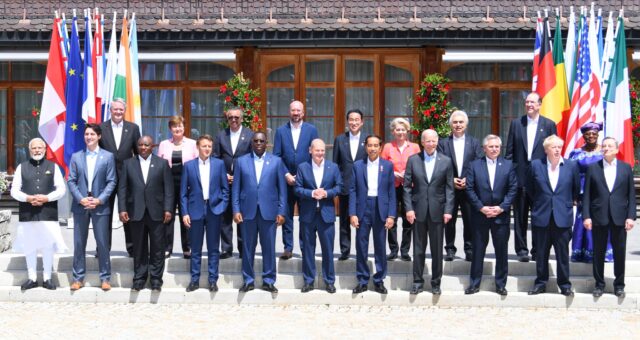 Prime Minister Narendra Modi visited Germany at the invitation of the German Chancellor, H.E. Mr. Olaf Scholz, for the G-7 Summit under the German Presidency. Prime Minister’s visit was an effort to boost international collaboration on important global issues which are impacting humanity.

Prime Minister Shri Narendra Modi met with the President of Argentina, H.E. Mr. Alberto Fernandez, in Munich on the sidelines of the G-7 Summit on 26 June 2022. This was the first bilateral meeting between the two leaders. Both the leaders reviewed progress in implementing the bilateral Strategic Partnership which was established between Argentina and India in 2019. Both the leaders discussed various issues including trade and investment; South-South cooperation, especially in the pharmaceutical sector; climate action, renewable energy, electric mobility, nuclear medicine, defence cooperation, agriculture and food security, cultural cooperation and traditional medicine.

Prime Minister Shri Narendra Modi met with the President of South Africa H.E. Mr. Cyril Ramaphosa, on 27 June 2022 on the sidelines of the G-7 Summit. Both leaders underlined the progress made in bilateral relations between the two countries, predominantly following the signing of the Strategic Programme of Cooperation in 2019. They expressed satisfaction at the progress achieved in the defence, education and agriculture sectors and the increase in people-to-people contacts. Both leaders also welcomed the WTO agreement that supports the production of COVID-19 vaccines in developing countries.

Prime Minister Shri Narendra Modi met with the Chancellor of the Federal Republic of Germany, H.E. Mr. Olaf Scholz, on 27 June 2022 on the sidelines of the G-7 Summit. This was their second meeting this year; the previous meeting took place during the PM’s visit to Berlin on the 2nd of May, 2022 for the India-Germany Inter-Governmental Consultations. Prime Minister also thanked Chancellor Scholz for the invitation to the Summit. Both leaders continued their discussions from last month and emphasized the need to take ahead with their Green and Sustainable Development Partnership. Issues like climate action, provision of climate financing and technology transfer were discussed. Both leaders also agreed on the need to further enhance trade, investment and people-to-people ties.

Apart from meeting the country leaders, Prime Minister Shri Narendra Modi also met with the President of the European Commission, H.E. Ms. Ursula von der Leyen, on 27 June 2022 on the sidelines of the G-7 Summit. The leaders expressed joy at the resumption of negotiations on the Trade, Investment and GI Agreements between India and the EU. They reiterated India-EU engagements in various sectors, including digital cooperation, climate action and technology & innovation.

Prime Minister Shri Narendra Modi also held bilateral talks with the Prime Minister of Canada, H.E. Mr. Justin Trudeau, on 27 June 2022 on the side-lines of the G7 Summit. Both the leaders had a productive meeting in which they discussed India-Canada bilateral relations and agreed to further boost trade and economic ties, cooperation in security and counter-terrorism, as well as people-to-people exchanges.