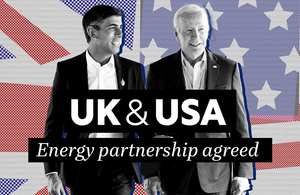 The President of the United States, Joe Biden, and British Prime Minister Rishi Sunak have agreed to increase gas exports between the two countries. It is a deal to ramp up gas exports from the US to the UK, which is a part of the joint effort to cut bills and limit the impacts of Russia on western energy supplies.

Both presidents announced an “energy security and affordability partnership,” and a joint action group was set up that was led by Westminster and White House officials. It has been particularly aimed at reducing global dependence on Russian energy.

Before the invasion of Ukraine, Britain was not reliant on large quantities of Russian gas, but it has been exposed to huge rises in prices as European neighbors competed for other supplies as everyone rushed to fill up storage facilities.

Under this deal, the US is aiming to more than double the amount of liquefied natural gas (LNG) that will be exported to the UK over the coming years as compared with 2021. The two countries have also intended to collaborate on accelerating green initiatives, such as decarbonizing the aerospace industry, boosting the electric vehicle market, and developing energy-efficient appliances. They have also further planned to collaborate on nuclear, hydrogen, and carbon capture projects.

Rishi Sunak said that “Together, the UK and US will ensure the global price of energy and the security of our national supply can never again be manipulated by the whims of a failing regime.”

A key gateway for LNG imports and re-exports into Europe this year has been proven Britain. However, due to its lack of gas storage facilities, it might still face tight energy supplies this winter. The government has said that, as part of the gas deal, the US will strive to export at least 9–10 billion cubic meters (bcm) of LNG over the next year via the UK terminals. It will more than double the amount exported in 2021, leveraging the UK’s leading import infrastructure.

In a joint statement, Biden and Sunak said that during this time of crisis, which has been brought on by the invasion of Russia in Ukraine, it is more important for the allied countries to deepen their cooperation in order to ensure resilient international systems that reflect the shared values of the countries. Further, they stated that working with the allies, the United States and the United Kingdom both committed to intensifying the cooperation to support international energy security, sustainability, and affordability, as Europe is reducing its dependence on Russian energy.