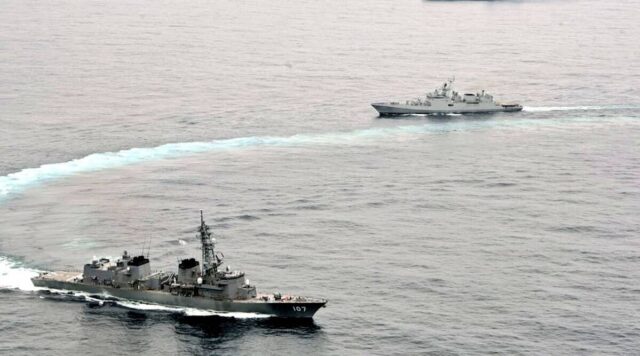 From October 6 to 8 this year India and Japan held the fifth edition of the Japan-India Maritime Exercise (JIMEX) in the Arabian Sea. Since 2012, the exercise is being held between the Indian Navy (IN) and the Japan Maritime Self-Defence Force (JMSDF). It aims to develop a common understanding of operational procedures and enhance inter-operability through the conduct of a multitude of advanced exercises, across the entire spectrum of maritime operations. It will further enhance the cooperation and confidence between the two navies as well as bring the countries together to face worst of times. Multi-faceted tactical exercises involve weapon firings, cross-deck helicopter operations and complex surface, anti-submarine and air warfare drills will consolidate coordination developed by the two navies.

The Navy stated that “The complex maritime exercises undertaken will enable the two navies to further strengthen their already wide-ranging strategic partnership and, when required, to jointly safeguard their maritime interests and ensure peace, security and stability in the region.”

JIMEX-21 involved ships and aircraft from both the Japan Maritime Self Defense Force (JMSDF) and the Indian Navy (IN). The Indian side was represented by indigenous guided-missile destroyer INS Kochi (with Sea King MK 42B helicopters), the guided-missile frigate INS Teg (with search and rescue capable Chetak helicopters), a P8I shore-based maritime reconnaissance aircraft, and MiG 29K fighters was commanded by Indian Rear Admiral Ajay Kochhar, flag officer commanding the Western Fleet. On the other hand, the Japanese brought the Izumo-class helicopter carrier Kaga and the guided-missile destroyer Murasame and Japanese Rear Admiral Ikeuchi Izuru commanded their side during the exercise.

The coordination and high level of commitment reflected not only the high standards of professionalism and preparedness the two navies maintain to counter threats at sea, but also the high level of trust and understanding that they have built over the years. The complex maritime exercises undertaken will further strengthen their wide-ranging strategic partnership and, when required, jointly safeguard their maritime interests and ensure peace, security and stability in the region.