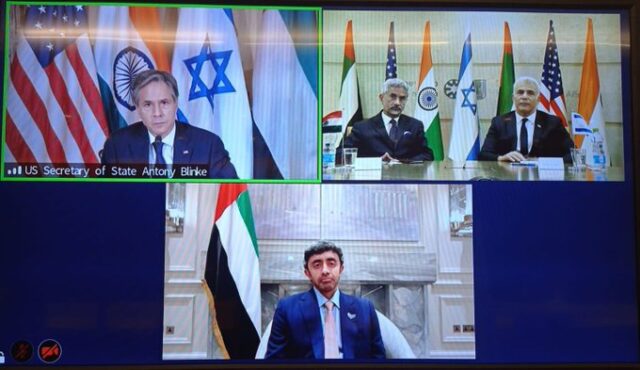 The Foreign Ministers held their first virtual meeting this month based on the momentum created by the Abraham Accords. The meeting which has been described as a “new Quad” by few researchers was joined by external affairs minister Dr S Jaishankar, Israeli Foreign Minister Yair Lapid from Jerusalem, United States secretary of state Antony Blinken from Washington and UAE foreign minister Sheikh Abdullah bin Zayed Al Nahyan from Abu Dhabi. During the meeting, EAM S Jaishankar was on the visit to Israel and was seen attending the meeting with Foreign Minister Lapid through the same room. The main aim of the meeting was to bring together and further strengthen the coordination and cooperation between the countries. The primary and most important outcome of the meeting was an in-principle agreement to establish an international forum for economic cooperation. Since this year there already has been continuing efforts by the countries to work together. This can be seen from the first trilateral partnership held in May between India, UAE and Israel. There has been an increase in working on areas such as economic growth and global issues.

According to the statement published by the Israeli embassy in New Delhi, the Abraham Accords agreement between Israel and the UAE had “paved the way for friendships and business partnerships across the region”. The statement further added, “India being a friend of both the UAE and Israel is the preferred partner to leverage the global potential of the UAE, Israel and India trilateral.”

During the meeting, the four ministers discussed possibilities for joint infrastructure projects in the fields of transportation, technology, maritime security, and economics and trade, as well as for additional joint projects. At the end of the meeting, it was decided that each minister will appoint a senior-level professional to a joint working group that will formulate the framework for cooperation in the areas identified by the ministers. Also, as further discussed it was decided that another in-person meeting will be held between the ministers at Expo 2020 in Dubai.