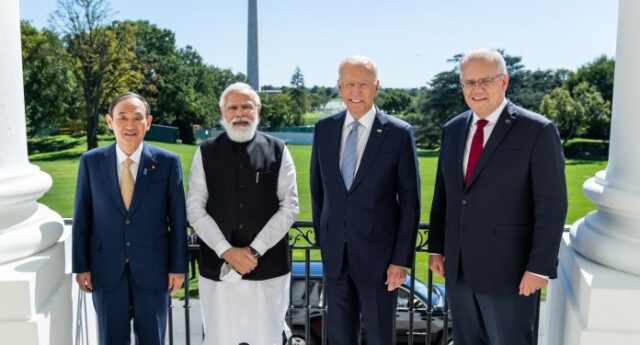 The first in-person Quad leaders’ summit on 24 September saw the crystallisation of the group’s commitment to the Indo-Pacific region. Building up to the virtual summit held earlier this year in March; the in-person meeting reflects the Quadrilateral Security Dialogue’s readiness to augment its agenda. To gauge a better understanding of how far the Quad has come within a short period, one must look at the Quad ministerial meeting that was held just a year ago, where the Quad ministers did not release a joint statement and India released a readout that did not even mention the term “Quad.” However, in this September summit, the agenda and deliverables brought to the frontline are a testament to the willingness of the Quad members to cooperate.

The joint statement released saw the Quad leaders enhancing cooperation in the Covid-19 vaccine initiative where India is said to resume its vaccine exports by October, a Quad STEM fellowship, Quad technology principles, a leader-level cybersecurity initiative, a green shipping network, 5G deployment, and a semi-conductor supply chain initiative. In addition to this, new task forces on space, climate, and infrastructure coordination were also inaugurated. The new working groups and a follow-up on existing initiatives disclose that the Quad is envisioning itself as more than just a counter to China. The Quad’s expansive agendas disclose that in the backdrop of a global health and economic crisis, it will continue regional engagement while striving for a free, open, and inclusive Indo-Pacific region. The in-person summit shows the group’s recognition that the Quad needs to deliver and provide practical solutions to be a force to be reckoned with among other regional stakeholders. While it is evident that the Quad is gathering momentum, its journey has not been so seamless. It has had to grapple with reticent member countries, seeking out avenues of cooperation and find new strategies to address China in ways that would be acceptable to all members.

The Quad: What it Was and How it Came to Be

The Quad has been a group that has had to evolve with the changing geopolitical realities of the Indo-Pacific region. The group first emerged as a coordination mechanism to respond to the humanitarian crisis in the aftermath of the 2004 Indian Ocean Tsunami. After a lull period of nearly ten years, it re-emerged in 2017 where the group became more proactive. Owing to a rising China, India, and Japan found themselves clashing with Beijing, the United States recognised a need to consolidate its efforts to counter the rising superpower, and Australia had come to realise the influence the East Asian country exercised over its politics and economy; kindling a period of strategic ambiguity on its role in the Quad. However, over the years the strategic community and political circles world over, have come to see a Quad with renewed vigour and a willingness to explore avenues of cooperation. Even in the years between the cessation and re-ignition of the Quad, the members continued to cooperate on a bilateral and trilateral level. Over time, the grouping has increasingly come to play a significant role in contouring the regional security architecture. In doing so, the group has received much pushback from China as members started realising that a rising China could no longer go unchecked in the region. The Quad countries met five times between 2017 and 2019 which was a direct result of Beijing’s clamorous rise. As fault lines started appearing between each of the member countries and China; gradually a visible shift in the way the Quad approached the Indo-Pacific region started emerging, culminating in growing diplomatic engagements. The proof of the pudding can also be seen outside diplomatic meetings where navies of the four-member nations involved in the Malabar exercise have become the cornerstone of military interoperability of Quad forces. Malabar, which was initially a bilateral exercise is now seeing enhanced synergy among the four navies.

The Future of Quad

China’s ties with Asian countries might be significantly impacted by the Quad’s ability to re-engineer geopolitical realignments, most importantly the three Indo-Pacific countries in the group. While the Biden Presidency seems to be continuing the momentum set forth by the Donald Trump administration, the initiatives and the overall approach that all four member countries are currently donning will increase coordination and cooperation across multiple domains. Diplomatic coordination both at the ministerial and leadership level is crucial in acquiring greater traction. The Quad STEM fellowship, for instance, involves both private and public sector entities which will help in ameliorating a diverse talent pool and network that can have a long-term impact. While there was no mention of a “defence” section, some of the agendas have a critical security component to them. The most glaring features are in the technology, maritime, and space domains. Although China was not explicitly mentioned; it is implied in how the member countries were expressing concerns in the region and its reiteration of their shared vision of the Indo-Pacific. The Quad’s activities have always been viewed as a direct counter to China, but with a myriad of issues being addressed; apart from some that have a security component, it puts forth the idea that the Quad can go beyond just China factor. The member countries pondering over multi-domain agendas even opens up avenues of cooperation for a Quad Plus mechanism to be involved, which could potentially add various dimensions to the group. With the group gathering steam and agendas set to be operationalised, the Quad will continue to re-furbish its approach in dealing with Beijing and will have to think of innovative ways to deal with the shifting strategic realities of the Indo-Pacific region.