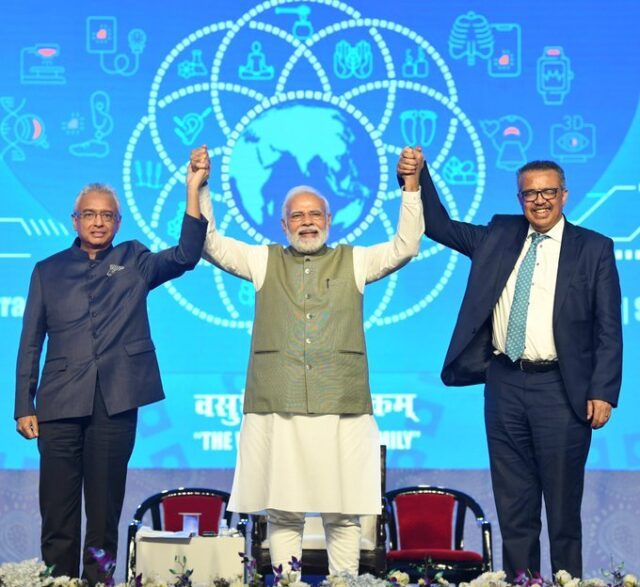 Indian Prime Minister Narendra Modi and Mauritian Prime Minister Pravind Kumar Jugnauth on April 20 took part in a roadshow in Ahmedabad. Locals cheered for the two leaders from both sides of the road as they traveled in separate vehicles.

Later the leaders went to the Raj Bhavan in Gandhinagar after the roadshow.

On the same day, evening, Prime Minister Modi along with Mauritius Prime Minister Jugnauth visited the WHO Global Centre for Traditional Medicine for a ground-breaking ceremony in Jamnagar. WHO chief Tedros Adhanom Ghebreyesus also attended the ceremony.

​​The Mauritius Prime Minister is visiting India for eight days at the invitation of Prime Minister Narendra Modi. He arrived in India on 17 April. He is visiting different parts of India along with his wife Kobita Jugnauth and a high-level delegation.

The Prime Ministers will also participate in the Global Ayush Investment and Innovation Summit in Gandhinagar.

After attending ceremonies and official meetings in Gujarat and Delhi, the visiting Prime Minister will also visit Varanasi.

According to an MEA press release, “India and Mauritius enjoy uniquely close ties, bound by shared history, culture, and heritage. The upcoming visit will further strengthen the vibrant bilateral ties.”

During the ceremony, the Indian Prime Minister said that India and Mauritius were united by history, ancestry, culture, language, and the shared waters of the Indian Ocean. “Today, our robust development partnership has emerged as a key pillar of our close ties. Mauritius is a prime example of India’s approach to development partnership which is based on the needs and priorities of our partners and respects their sovereignty,” PM Modi said.

The Mauritius Prime Minister thanked India for wide-ranging assistance including financial assistance to his country. In recent years, the countries have collaborated on a range of infra projects and have achieved great success.