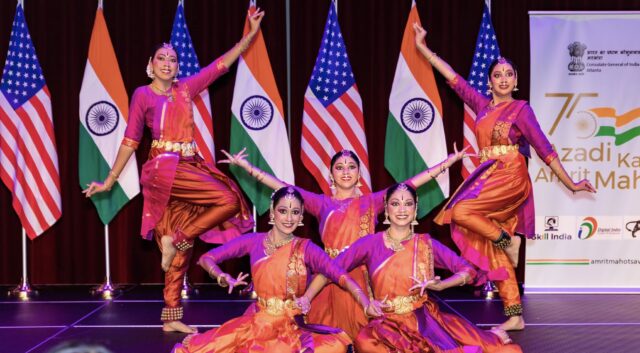 The Indian diaspora is one of the most vibrant and dynamic hyphenated American groups living in the United States of America. The latest US census data (2021) reveal that there are more than 4 million Indian-Americans, which make up 1.3 per cent of the US population. Indian-Americans, are one of America’s fastest-growing ethnic groups, with a population surge of more than 40 per cent since 2010.

The presence of a culturally rich, highly educated, and financially successful community serves as a connecting link between the largest and the oldest democracies of the world. At least 79 percent of the Indian community is proficient in the English language (2019 data) and about 68 percent hold a bachelor’s degree. According to Indian-American Congressman Raja Krishnamoorthi, Indian-Americans possess the highest per capita income of any community, have a major presence in highly competitive fields, including computer science and finance, and almost 10 per cent of American doctors are of Indian descent.

From making their way to Silicon Valley to handling sensitive US government projects such as nuclear buildups to biotechnology, Indian-Americans have made it big in the land of opportunities and talent. The Biden administration is particularly notable for accommodating a large number of Indian-Americans in the presidential administration. In the 2021 Congressional elections, Americans of Asian Indian origin fared particularly well, with all Indian-origin Democrat candidates retaining their seats. The present US Vice President, Kamala Harris, is partial of Indian origin and bears an Indian name which undoubtedly raises the profile of Indian-Americans in the country.

It is noteworthy that the presence of the Indian diaspora in Atlanta, that is the southeastern states of the United States of America comprising Florida, Alabama, Mississippi, South Carolina, Tennessee, Puerto Rico, and the US Virgin Islands is more than 450,000 consisting of highly qualified IT professionals, lawyers, doctors, business persons among others. The major concentrations of the Indian-American are found in Florida and Georgia. The strong economic connections that Indians enjoy in the Atlanta region of the United States are exemplified by the upward trend in trade and investment in these southeastern states of the USA. The Indian-Americans form a progressive community contributing to the development of Atlanta and investing in food, agriculture, healthcare, hospitality, technology, automobile industry, retail sector, and logistics.  Over 12.5 billion US dollars have been invested by the Indian-Americans living in Atlanta.

But the successes of the Indian-American community can’t simply be measured by these statistics alone. From the boardrooms of Palo Alto to the prestigious lecture halls of Boston, the Indian diaspora has made its mark in all fields of American society and economic activity.

Considering the contribution of Indian-Americans in the big-ticket developmental events in independent India such as the Green Revolution and post-liberalisation growth of Information Technology (IT) and allied service industries; it will not be extravagant to claim that the ‘engagement’ between the two countries in the globalized environment is partly due to the role of the Indian diaspora in the United States which has contributed towards diplomatic bridge-building, positive changes in attitude and robust relation between the two democracies.

According to the International Diaspora Engagement Alliance (IdEA), the United States is home to the largest number of people belonging to diaspora communities. Indian-Americans now make up about one percent of the USA’s population. It has been estimated that with the current pace of emigration, this percentage would rise to two percent by 2030. The mutual ties that have been possible due to the presence of a strong diaspora in the region that in turn helps boost growth and development along with amicable relations between the two democracies.

It is worth recalling that the Indian government has, on multiple occasions in 1991, 1998, and 2000 issued special bonds for Non-Resident Indians to invest in. In 2013, the Indian government launched a special foreign currency deposit and investment scheme for Non-Residents whereby it accumulated a total of $30 billion worth of investments. The same network of diaspora Indians assisted American aid efforts to India during the Covid-19 outbreak.  Indian Americans are crucial to the very substantial American investment in India which amounted to $200 billion in just the four years preceding the outbreak of the Covid-19 pandemic.  The Indian diaspora, therefore, has proven itself to be a key component of the US economy while contributing to the development of India’s industry and service sector. The Indian diaspora establishes itself as a strong and indispensable pillar of Indo-American cooperation.

The India Caucus in US Congress is the largest country-specific caucus in the Capitol and includes prominent Indian-American politicians such as Ro Khanna who is the Vice President of the said Caucus. Again, the interesting fact remains that the diaspora’s involvement and interest in Indian domestic politics have grown along with its’ growing political weight in American politics. Such tendencies can prove to be particularly useful for Indian politicians and for those American political and business leaders who are interested in India. It is possible to be optimistic about the role of the Indian diaspora in solidifying the India-US partnership for the future.

India’s soft power has been well represented in recent years through the India-Atlanta cooperation in the celebration of International Yoga Day. The International Yoga Day is celebrated with much fanfare and enthusiasm by the people of Atlanta, manifesting solidarity between India-Atlanta in particular and India-US in general. The celebration of India’s Independence by the Consulate General of India, Atlanta and their vibrant presence on social media handles with more than thousands of followers best exemplifies the friendship between the two countries.

Indian Diaspora already is and can further work to soften the edges of India-US ties. It enhances relations between the two democracies by bringing business, technology, investment, education, and culture together to work as a diplomatic soft-power instrument to bring mutual prosperity, and development, and aim towards building a world order based on peace, rule of law, and sustainable development.