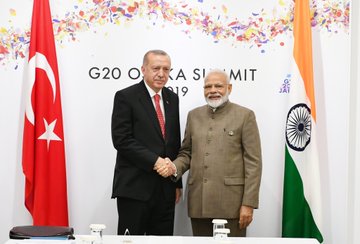 In modern times, we can safely say that no nation or country can live in isolation. The coexistence of the nations is the order of the day (Malhotra, 2001). It can therefore be said that international relations are of prime importance in the world society from any aspect that is taken for analysis or consideration.  It is all the more important because global politics is in the midst of dramatic and accelerating change (Mansbach & Taylor. 2012). In the present context of the international scenario, international relations have assumed all the more great significance. In the twenty-first century, we live in a world that is both fascinating and terrifying – one that exhibits deep contradictions and yet manifests high hopes (Duncan et al. – 2002). It should be stated that the relationship of nations emits a great mark of implications not only in the relationship status of two or more countries but also exerts a tremendous influence all over the region and the world. Therefore, an international relationship is significant from all dimensions (Chakrabarty 2014).  Like human relations, international relations between and among countries become significant particularly when the world is being referred to as a global village (Chakrabarty, 2014).

At the outset, it may be stated that Turkey is located at the crossroads of Asia and Europe, it is geopolitically a very important player in a volatile region, and economically, as a hub for third country exports, particularly as a stepping stone into the EU market. The relationship between the two countries of India and Turkey is primarily based on the Friendship Treaty with Turkey which was signed by Pandit Jawaharlal Nehru in the year 1951. This treaty underlined India’s hopes for building a lasting partnership with Turkey in the post-colonial era. In the domain of international relations, the aspect of India –Turkey bilateral relationship is of much significance for various reasons. The diplomatic relationship between the two countries was established as early as in the year of 1948. The state of the relationship between the two countries is primarily based on warmth, cordiality, and mutual understanding. If we take the diplomatic front, India has an embassy in Ankara and a Consulate–General in Istanbul. On the other hand, Turkey has an Embassy in New Delhi and a Consulate-General in Mumbai.

So far as the aspect of economic and cultural relations between ancient India and Anatolia is concerned, it dates back to the Vedic age. A little peep into the history would reveal the fact that there are deep historical connections between the two countries of India and Turkey. History bears the testimony of the fact that the first exchange of diplomatic missions between the Ottoman Sultans and the Muslim rulers of India dates back to the years 1481–82. With the flow of time, even after that period, we can trace the vestige of a strong historical connection between the Indian Muslims and Turkey. It dates back to the medieval era. This bond was fostered even during the late 19th and 20th centuries. It can be proved by the close interaction between the two countries. If we turn our attention to other dimensions, it can be seen that India and Turkey reflect a substantial cultural overlap. There is no denying the fact that the impact and influence of Turkey can be felt in language, culture, and civilisation, art and architecture, costumes, and cuisine. The impact had been substantial. It has been pointed out by scholars that there are over 9,000 words common in Hindi and Turkish languages.  Further, close contacts between India and Turkey have also been reflected in the medical mission led by renowned Indian freedom fighter, Dr. M. A. Ansari, to Turkey as early as in the year 1912, during the Balkan Wars. The most important part is perhaps the Indian support which was extended in the 1920s to Turkey’s War of Independence and the formation of the Turkish republic. It is significant to point out that even Mahatma Gandhi, the Father of the Nation, took a strong stand against the injustices which was inflicted on Turkey at the end of the First World War. On the part of Turkey, it also played a significant role. Turkey extended recognition to India right after it declared independence on 15th August 1947. Turkey also established diplomatic relations with India.

It must be said that the bilateral relationship between India and Turkey concerning economic and commercial cooperation constitutes an important dimension of the bilateral relationship. India and Turkey signed the Bilateral Trade Agreement in the year 1973. Institutional arrangements in terms of the Joint Committee for Economic and Technical Cooperation (JCETC) were signed in the year of 1983. Further, in order to put momentum in the bilateral trade relationship, a Joint Business Council (JBC) between the Federation of Indian Chambers of Commerce and Industry (FICCI) and Foreign Economic Relations Board of Turkey (DEIK) was set up in the year 1996. It should be stated further that on the 6th of April 2015, the Confederation of Indian Industry (CII) signed an MoU with the Union of Chambers and Commodity Exchanges of Turkey (TOBB). The major purpose of signing the MoU was to promote bilateral trade and economic cooperation. A cooperating agreement between FICCI and TOBB was also signed for establishing India-Turkey Working Committee and Investment Forums. On 6th August 2015, the State Bank of India and Turkey’s Akbank entered into a cooperation agreement to support bilateral trade and investments. Further, the CII also signed an MOU with DEIK in March 2018. An India Business Forum (IBF) was launched in Istanbul by the Ambassador in December 2018.

Further, in recent times quite a good number of Indian companies have started their operations in Turkey, and on the other hand, many of the Turkish business houses are showing interest in the Indian market. It is also necessary to mention in this connection that India’s economic engagement with Turkey experienced new momentum in recent years.  Bilateral trade grew 22% to cross US$ 8.6 billion in 2018. So far as India’s rank in Turkey’s overall imports in 2018, India stood in 6th position.  It is pertinent to mention that the major Indian exports to Turkey include: petroleum products, auto components/parts, man-made yarn, fabrics, made-ups, aircraft and spacecraft parts, plastic raw materials, organic chemicals, dyes, industrial machinery, etc. On the other hand, imports from Turkey include industrial machinery, broken/unbroken poppy seeds; machinery and mechanical appliances, iron and steel articles thereof, inorganic chemicals, pearls, and precious/semi-precious stones and metals (including imitation jewelry), granite and marble, etc. The major arm of the business in any country is the companies. In this aim, a very substantial number of Indian companies are registered in Turkey.  It may be said that leading Indian companies which operate in Turkey include: TAFE, Mahindra, Sonalika, Tata, Jindal, Indo-Rama, Birla Cellulose, Polyplex Merrill Lynch, Punj Lloyd, Thermax, Wipro, Jain Irrigation, etc.  These companies have made investments in Turkey to the tune of USD 125 million. On the contrary, Turkish investments in India stand at USD 223 million, according to Turkish data. From the side of Turkey, Turkish companies like Koc Holding, Arcelik A.S, Dogus Holding Dogus Construction, Celebi Holding, Orhan Holding, and many others operate in India.

However, during the recent past, the bilateral trade relations between India and Turkey started its new phase of the journey.  It has also been observed that both sides attached sufficient importance in the areas of developing bilateral cooperation programmes in order to boost the economy of both countries. The major purpose had been to enhance the commercial relations which would be of mutual benefit to each other and that must take the route on a sustainable basis. It is necessary to mention in this connection that India‘s rapid progress in different areas and ever-growing importance in the global economy and international politics since the 1990s has led  Turkey to develop a new strategy for the South Asian countries. This aspect has been much reflected in the activities of Turkey which has started the process of giving a decisive priority to India in the domain of South Asian politics. We also find that there is a growing trend of bilateral cooperation in several fields including education, technology, and commerce.

During the year 2015-16, bilateral trade stood at USD 4.9 billion, with India exporting goods worth 4.14 billion and importing goods worth 776.94 million. Of course, it was a 27 percent decline from the total bilateral trade of USD 6.8 billion during the year 2014-15. But it was largely attributed to the global slowdown in trade and commerce. India and Turkey, the two G-20 economies are now looking to improve commercial relations and see a significant potential to boost bilateral trade and investments. It is seen that both India and Turkey are driven by the earnest desire to tap the possibilities for business, trade, and investments. Naturally, it can be said that from the trade and commerce relationship point of view, the relationship has already received a dynamic momentum and it is expected to move to a higher plane.

Defending Czechia: The State and its Burgeoning Defence Apparatus