For decades, Oman has been an important player in India’s West Asia Policy. Its importance in India’s strategic calculations for West Asia can be understood from the number of official exchanges between the two countries.

In 2015, both nations celebrated 60th Anniversary of their diplomatic relations. This celebration was filled with more colours with the visit of External Affairs Minister of India, Sushma Swaraj, to Oman on 17-18 February 2015. During her visit, the two countries discussed bilateral, regional, and other issues of mutual interest.

On 20 May 2016, the Defence Minister of India, Manohar Parrikar, paid a three days visit to Oman. The visit recapitulated the significance that India attaches to its Strategic Partnership with Oman. The visit was aimed at expanding defence relations between the two countries. During the visit, Indian Defence Minister expressed his heartfelt gratitude for Oman’s perpetual assistance for “the Operational Turnaround (OTR) of Indian Navy ships for anti-piracy patrols as well as technical support for landing and over flight of Indian Air Force aircraft”. During the visit, four Memoranda of Understanding (MOUs) were signed between the countries. While Ministerial level engagements have been continuing during this period, a visit of Indian Prime Minister, Narendra Modi, to Oman will raise India-Oman Strategic Partnership to a new height.

Recent developments in India-Oman bilateral relations have raised the horizon of collaboration between the two countries. In January 2016, the Indian Navy and the Royal Navy of Oman conducted a bilateral maritime exercise Naseem-Al-Bahr in the Arabian Sea from 22-27 January 2016. It was subsequently followed by good will visit of Indian Coast Guard ship Sankalp to Muscat to strengthen existing security ties in February 2016. In March 2017, the
troops of two countries concluded ‘Al-Nagah-II 2017’ military exercise in “Bakloh belt of Himachal Pradesh which was aimed at strengthening the military ties between the two countries”. Earlier, in 2010, Oman became the first Gulf State to buy Indian small arms system (INSAS), developed by the state-run Ordnance Factory Board. It has also given the birthing rights to India’s naval vessels to fight against piracy in the Gulf of Aden.

The economic and commercial relations between India and Oman remain robust and buoyant with bilateral trade reaching US$4 billion in 2016-17. Investment flows, both ways, have been robust, as reflected in numerous joint ventures, established both in India and Oman. Indian business entities have emerged as prime investors in Oman, particularly in Salalah and Sohar free zones. More than 2900 Indo-Omani joint ventures have been established. 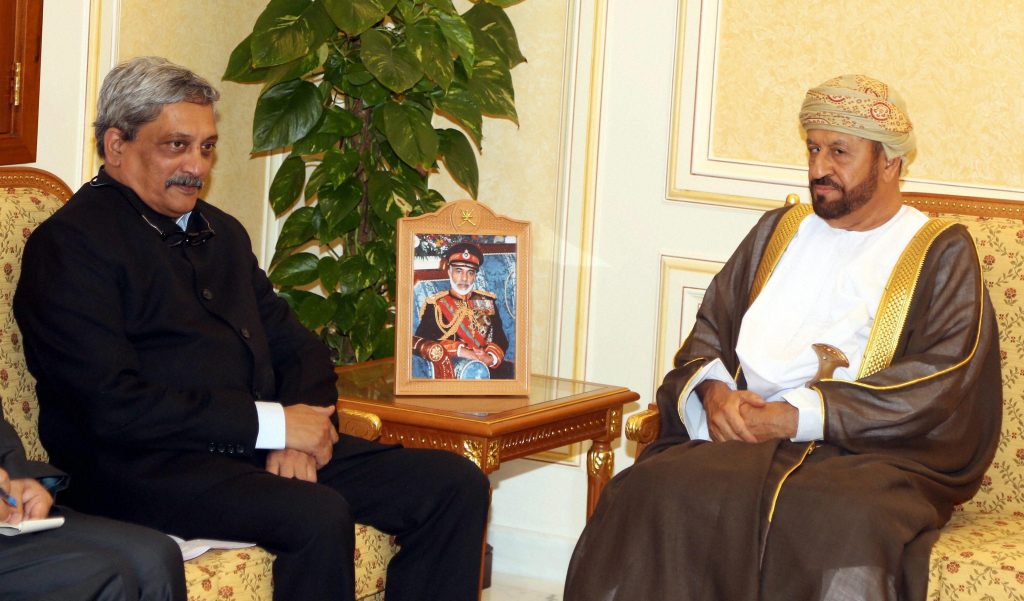 Indian firms have gained reputation for excellence in sectors like construction and engineering, waste management, logistics, manufacturing, finance and capital, software solutions, communications, oil & gas etc. The India-Oman Joint Investment Fund has been operational and the initial corpus of US$ 100 million has been fully utilized. The next tranche with an increased corpus of US$ 220 million is ready for investment.

While India does not import oil from Oman, except for occasional spot purchases, significance of Oman for India’s energy security will rise if the proposal for construction of underwater natural gas pipeline known as Middle-East to India Deepwater Pipeline (MEIDP) from Iran, visa Oman, materializes.Oman is important for our food security in the sense that India imports significant amount of Urea fertilizers from Oman which is produced by major Oman-India joint venture OMIFCO Fertilizer Plant.

Another area which can attract India’s attention towards Oman is its strategic importance Duqm Port. This port is situated in the middle of international shipping lanes connecting east with West. It needs to hasten grip which will open up energy corridors and trade routes to African, European, and Middle Eastern markets via Oman. It would thereby embolden India’s national interest in “the Greater Indian
Ocean, Eurasian, and MENA regions”.

India needs to engage with Oman and secure its presence in Duqm Port. On 2 January 2016, Oman’s Supreme Council for Planning came out with its 9th Five Year Development Plan (2016- 2020) to reduce the Sultanate’s economic reliance on oil by 50 percent in line with Oman Vision 2020. From business point of view, it highlights the broad economic and business prospects for Indian enterprises specially in the sectors emphasized under Oman’s National Programme of Economic Diversification like mining, logistics, manufacturing, tourism, etc.

A fleeting look of current India-Oman ties from strategic point of view shows that the relation is dominated by bilateral defence cooperation. It is highly imperative for India at this juncture to broaden the areas of cooperation with this crucial Gulf state, which has enormous business opportunities for India. While the two countries have been collaborating with each other at various levels, a simple push can take the relations to new heights. The last visit of Sultan Qaboos Bin Said al-Said to India was in 1997, though “India awaits the visit of His Majesty Sultan Qaboos Bin Said Al Said to India to receive the Jawaharlal Nehru Award for International
Understanding for the year 2004”.

From Indian side as well, Prime Minister Modi has visited Gulf countries such as UAE, Saudi Arabia, Iran and Qatar but a visit to Oman is yet to take place. One high level visit either from Oman or from India will provide a fresh fillip expanding and strengthening bilateral ties between the two countries.