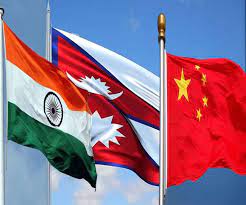 Nepal is also a friendly neighbour country of India which share over 1850 Kms long borders with five Indian States – Sikkim, West Bengal, Bihar, Uttar Pradesh and Uttarakhand while its borders in north touch with Tibet Autonomous Region of the People’s Republic of China.   Being the only Hindu nation, Nepal have shared unique ties of friendship  and co-operation with open borders and people-to –people contacts since the pre-historic times of Ramayana. Despite its size and small population and low economic levels, Nepal was never was never a part of India or colonised by any other country but shared excellent relations with India all through the ages. However, formal diplomatic relations established in June, 1947 between these two nations encouraged democracy, pluralism, stability and socio-economic progress of both the nations (Sibal, 2013).
The India-Nepal Treaty of Peace and Friendship, 1950 form the basic framework and guiding principles of bilateral ties between these two neighbouring countries. This treaty also mandated the collective security of both nations from a foreign aggressor with obligation to inform each side of any friction or mis-understanding likely to cause any breach in friendly relations. Nearly 6.00 lac strong Indian communities are presently residing in Nepal including businessmen, traders and professional. India and Nepal concluded Treaty of Transit, Treaty of Trade and the Agreement of Co-operation which determine bilateral trade and provide transit facility to Nepal for the third country trade.  Regular visits of senior leader’s and interactions between India and Nepal remained quite common as Nepalese PM visited India to attend the swearing-in ceremony of PM Modi in May, 2014 with a reciprocal visit of Modi to Nepal in Aug, 2014 and Nov, 2014 (to attend SAARC Summit), during which several bilateral agreements were signed and or revised between India and Nepal including bilateral institutional dialogue mechanisms with India-Nepal Joint Commission. During the devastating earthquake which hit Nepal on 25 April 2015, the Government of India swiftly dispatched National Disaster Response Force (NDRF) teams and special aircrafts with rescue and relief materials to Nepal (MOFA, 2019).

On political front, the 12-Point understanding between Seven Party Alliance and the Maoists at Delhi reached in November 2005 was welcomed by India as a stepping stone towards political stabilization in Nepal, through peaceful reconciliation and inclusive democratic processes achieved based on historic Comprehensive Peace Agreement. India also steadily responded to the needs of people in ensuring success of peace process and institutionalization of multiparty democracy through framing of a new Constitution by a duly elected Constituent Assembly. India’s major interest has remained in Nepal’s peace and stability which has a critical bearing on India as well because of the long and open border shared between India and Nepal (MOFA, 2019).

India is Nepal’s largest trading partner, and the bilateral trade in 2018-19 reached Rs. 57,858 crores (US $ 8.27 billion) with Nepal’s exports pegged at Rs. 3558 crores (US $ 508 million) against India’s exports of INR 54,300 crores (US$ 7.76 billion). There are approximately 150 operating Indian ventures in Nepal involved in manufacturing, services (banking, insurance, dry port, education and telecom), power sector and tourism industries. Some big Indian investors include ITC, Dabur India, Hindustan Unilever, VSNL, TCIL, MTNL, State Bank of India, Punjab National Bank, Life Insurance Corporation of India, Asian Paints, CONCOR, GMR India, IL&FS, Manipal Group, MIT Group Holdings, Nupur International, Transworld Group, Patel Engineering, Bhilwara Energy, Bhushan Group, Feedback Ventures, RJ Corp, KSK Energy, Berger Paints, Essel Infra Project Ltd. and Tata Power etc. To sustain the momentum of this relationship, India announced a soft credit line of $1 billion for infrastructure, irrigation and energy projects. Indian firms have been big investors in Nepal, accounting for about 40 percent of the total approved FDI. Alongside, the current government recently took up the work of starting the 5,600 MW Pancheshwar project, which had remained stalled for 18 years after the agreement. However, sharing of the benefits and water from the reservoir – like irrigation and flood control – are yet to be agreed upon, in terms of price and quantity. To further such cordial bilateral relations, three significant deals were signed during the visit of Nepal’s Prime Minister to India in Sept, 2016 (Special correspondent, 2019).

Issues related to Security co-operation and Boundary Management stand already institutionalized formalizing co-operation in defence sector including training, joint military exercises, bilateral visits etc. and an estimated 32,000 Gurkha soldiers from Nepal are presently serving in Indian Army. In 1950’s New Delhi and Kathmandu introduced their intertwined relationship with the Treaty of Peace and Friendship and accompanying secret letters that defined security relations between the two countries, and an agreement governing both bilateral trade and trade transiting Indian land. Such treaties solidified relationship between India and Nepal that granted Nepalese in India the same economic and educational opportunities as Indian inhabitants. Connectivity and Development partnership, Water resources co-operation, Energy Co-operation. The immediate support and aid provided by India after the Nepal earthquake made significant impact to strengthen the existing congenial relations. The 66-year-old India Nepal Treaty of Peace and Friendship of 1950 was renewed in 2016 during the visit of Nepali PM to India besides which, both nations agreed to construct Integrated Check Posts (ICPs) on their respective sides at ports of entry in Birgunj, Biratnagar, Bhairahwa and Nepalgunj. Aiming at enhancing co-operation for greater economic integration and harness the economic integration, both Nepal are members of SAARC, BIMSTEC and BBIN, thereby complement each other in the region.

However, irked by major defence deals and higher dependence of Nepal on China in defence affairs, India imposed a 13-month-long economic barrier of Nepal, which resulted in downwards slide of Indo-Nepal relations during the year 1989. However, after visit of PM Modi to Nepal in 2014, things got normalized to some extent after slew of sops focusing on the 4 Cs of “cooperation, connectivity, culture and constitution to enhance bilateral ties.”  This indicates the resolve of Indian government to maintain affable bilateral ties with the Nepalese government. However, this was followed by a dry patch of uneasy relations with scars of turbulent period during 2015 post promulgation of new constitution which led to 6 month long mass movement by Madhesi’s leading to a tactical border blockade by Nepal government disrupting essential supplies and consequent generated resentment between New Delhi and Kathmandu. However, the Nepalese government blamed India of deliberately worsening the embargo, but India denies these allegations. Subsequently, India sidestepped the issue and reverted its diplomatic focus on maintaining amicable relations with Kathmandu, particularly in view of China’s growing imprint in Nepal and proximity of Mr. KP Oli to Beijing. Accordingly, in response to Kathmandu’s increasingly open defiance of New Delhi’s strategic imperatives, India’s trade and transit blockade of Nepal was imposed as India’s determination to bring recalcitrant neighbour on agreed treaties and conventions (Gupta, 2021).

Presently, the relations between India and Nepal are reasonably good though there are some troubles stemming from border disputes, geography, economics, and in-built problems of power projects, common ethnic and linguistic identities. The trade and transit treaty too created some differences between but most of them stand amicably resolved. India has offered significant financial and technical assistance to create infrastructure including projects of infrastructure, health, water resources, and education and rural & community development, border infrastructure through roads and cross-border rail links at Jogbani–Biratnagar, Jaynagar-Bardibas, Nepalgunj -Nepalgunj, Nautanwa-Bhairhawa, and New Jalpaigudi-Kakarbhitta, establishment of Integrated Check Posts  in Nepal. India has also helped in field of education and human resources development in Nepal. In cultural arena, Government of India initiatives to promote people-to-people contacts in the area of art & culture, academics and media include cultural programmes, symposia and events organized in partnership with different local bodies of Nepal, as well as conferences and seminars in Hindi. Assistance is also provided to several India-Nepal Friendship Organizations working to promote Indian culture and India-Nepal bilateral relations.

Nepal is an important partners for India’s strategic interests in view of India-Nepal Friendship Treaty of 1950. However, contrary to spirit of this treaty, Nepal signed a 14-point Joint Statement with China in 2013 for better co-ordination but miserably failed to stop China from constructing buildings in Humla territory. India-Nepal relations saw another downward with inauguration of 80 km long border road connecting Lipulekh pass with Dharchula in May, 2020  strongly opposed by Nepal claiming Lipulekh, Kalapani etc. as Nepalese territory. A fresh political map of Nepal was hurriedly approved by Nepalese Parliament to strengthen their claims, however, the issue died down after visit of Army Chief to Nepal. The unconfirmed reports of illegal occupation of Nepalese territory by China and highly skewed stance of the communist Nepal towards China are a matter of serious security concerns of India.

China’s investment in Nepal in form of foreign direct investments (FDI), humanitarian assistance and development aid in recent past has configured among the geo-political relations between Kathmandu and Nepal. After Maoist insurgency, China stepped in as a relatively new but formidable ally in trade and investments for Nepal thereby challenging the India’s standing (Roy, 2019).  China’s “Financial diplomacy” though facilitate economic growth yet fraught with conditions of creating absolute dependency and huge debt-trap. Post Nepal’s earthquake, China pledged UD $ 483 million for protection of historically significant buildings, reconstruction and development of Nepal. After the Sino-Nepal Trade and Transit Agreement (TTA) signed in 2016, Nepal became one of the first countries to join China’s Belt and Road Initiative. In addition, these two nations negotiated a number of rail (Kyirong-Kathmandu Railroad worth UD $ 2.15 billion), Cement Projects (Hongshi Cement (worth US $ 359 million) and Huaxin Cements, transmission projects etc. likely to bring more Chinese investments in Nepal. While China presents itself as a dependable trade and development partner, Nepal must be vary of her “Cheque book” diplomacy and India should  be immensely concerned due to “Dragons” inroads up to  her doorstep.