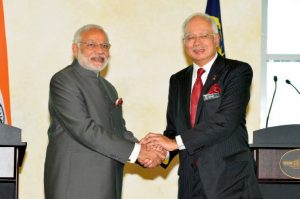 India and Malaysia have a long history of trade and cultural relations. Diplomatic relations between India and Malaysia were established in 1957 and the two countries in 2016 have completed the 59th anniversary of the foundation of their diplomatic engagement. Bilateral relations between India and Malaysia are cordial: both countries have interactions in various domains of economic, political, strategic, and cultural activities; and have cooperated on a sustained basis at various international fora. India-Malaysia cooperation also has its regional and international dimensions. Both are common members of various fora such as the Non Aligned Movement (NAM), the G-15, the G-77, the Commonwealth, World Trade Organization (WTO), ASEAN Regional Forum (ARF), the East Asia Summit and the Indian Ocean Rim-Association for Regional Cooperation (IORAC). India has always been extremely supportive of Malaysia’s active role in NAM while Malaysia also extended its support in favor of India’s status as an observer nation in the ASEAN.

India is looking to deepen ties with all countries of ASEAN, especially Malaysia, which it views as a natural stepping stone to the bloc with a combined estimated gross domestic product (GDP) of $3.8 trillion. India, Asia’s third largest economy, is building stronger political, economic and strategic ties with Malaysia, seen a moderate Muslim nation with a population of approximately 30 million, clocking growth rates of an annual 5 percent on an average. The complementary nature of Malaysia and Indian economy indicates a scope of greater linkage between their economies. Trade flow between these countries is the result of the ability and willingness to export on one hand and the intensity of demand for the exported commodity on the other hand.

The existing bilateral mechanisms include agreements on India-Malaysia Comprehensive Economic Cooperation Agreement (CECA), Avoidance of Double Taxation and Prevention of Fiscal Evasion; Trade; Promotion and Protection of Investments; Economic and Technical Cooperation; Culture; Air Services; and Exemption of Visa Requirements for Diplomats and Officials. In addition, a number of Government agencies of India and Malaysia have signed Memoranda of Understanding. These are in the areas of mutual cooperation in investment, construction, privatisation and management of seaports, information technology, civil service personnel management and public administration. The year 2015 witnessed the signing of one Agreement on Cultural Exchange Programme for 2015-2020 and two Memoranda of Understanding (MoU) on Cooperation in Project Delivery and Monitoring, and Cooperation on Cyber Security.

The bilateral trade stood at $3.04 billion for the period January to March 2014 compared to $3.48 billion during the same period in 2013. The bilateral trade between India and Malaysia in 2014-15 stood at $16.93 billion (Indian export to Malaysia was worth $5.8 billion and imports were at $11.11 billion) as against 13.43 billion in 2013-14. Trade remains significantly imbalanced in favour of Malaysia. Malaysia is currently the 23rd largest investor in India with foreign direct investment (FDI) inflows of $732 million in the last 15 years. On the other hand, as per Malaysian Investment Development Authority (MIDA), Indian cumulative investment into Malaysia from 1980-2014 has been around $2.31 billion which include January to December 2014 – $225.50 million. The substance of the bilateral relations between Malaysia and India, is very diverse covering the economic, social and cultural frameworks. Malaysia is the second largest trading partner for India within ASEAN and India is the largest trading partner for Malaysia from among the countries of South Asia, excluding China. During 2009, India was Malaysia’s 12th largest import source and 11th largest export destination. India’s imports from Malaysia, in the recent past, have largely been in commodities such as mineral fuels and machinery and transport equipment, while export commodities have been food items and manufactured goods. Malaysia is emerging as a major potential investor in India, with planned investments in power, oil refineries, telecommunication and electrical equipment industries, besides highway and other infrastructure development projects. Malaysian FDI in India is primarily focused on roads and highways, telecommunications, oil and gas, power plants, tourism and human resources. The highest investment proposals have been in the telecommunications, followed by fuels (power and oil refinery) sector and roads and highways Trade between the two countries has been on an upward trend – increasing more than four fold in the 2003-12 period.
The analysis suggests that the bilateral trade volume between the two countries has remained low. Equally significant is the observation that the relative mutual importance in each other’s trade is also low. Nevertheless, in the recent years, trade growth has been high, albeit trade flows have been highly volatile. It is also noticed that both bilateral exports and imports are characterized by high concentration and thinly spread shares across wide range of sectors. Though, bilateral relations have generally been cordial, the enthusiasm to engage deeper has remained absent. Bilateral ties have, however, improved during recent years due to the convergence of mutual interests in an economically globalizing world. Regular exchanges of high level visits have also contributed to the improved relations. India’s Prime Minister Narendra Modi described India’s relationship with Malaysia as the ‘core’ of its “‘Act East Policy.’” In 2014, Modi’s government re-cast India’s older “Look East Policy” as “Act East Policy,” signaling that his government would shore up India’s engagement with East Asia. “The ASEAN nations have welcomed India’s ‘Act East Policy’ and we in India are extremely enthusiastic to have better relations with the ASEAN family in areas such as defence, security and cultural ties. Robust India-ASEAN ties will give great impetus to our collective dream of making this century an ‘Asian Century’,” he said.

Trade linkages between the two countries could be intensified not only through tariff liberalisation but also by adopting various trade facilitation measures. These measures could, include entering into mutual recognition agreements (MRAs), to deal with issues of technical barriers to trade (TBT) and sanitary and phytosanitary measures (SPS); Customs cooperation; harmonisation of standards and conformity assessment; and enhancing business to business dialogue. It is also necessary to put in place various trade remedial measures, and rules of origin, as mutually acceptable, designed in such a way as to facilitate trade creation between the two countries. To facilitate trade between two partners, mutual recognition of standards and conformity assessment procedures through cooperative arrangements is important. In this context, it is imperative to have clear and transparent rules with respect to harmonisation of standards, equivalence principle, and criteria for risk assessment. In terms of implementation, it is also necessary that issues relating to, inter alia, approval procedures, inspection requirements, testing, and certification are also addressed.

The two countries have realized the reality of a complex interdependent world where it is irrational to impede cooperation in areas of mutual interests due to clash of interests in other areas. Therefore, after spending a long period at the negotiation table both now appear ready to get going. The assessment of both the countries’ bilateral relations reveals that during the first few decades there was no balanced policy but now, the policy adopted is having a bold, pragmatic and imaginative approach towards accelerated economic development and it will herald a new era of thinking and bilateral relations in terms of enhanced mutual co-operation supported by a wide range of agreements which have provided a framework to harness the full potential of the relationship.