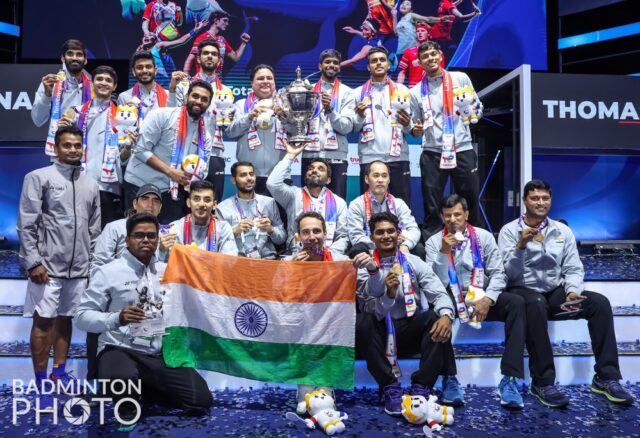 The Thomas & Uber Cup is the biennial international badminton championship contested by the national teams of men and women of the member associations of the Badminton World Federation (BWF). The 32nd edition of the Thomas Cup tournament was hosted in the Impact Arena in Bangkok, Thailand, from 8 to 15 May 2022. This is the third time that Thailand has hosted the Thomas Cup, and the Uber Cup for the second time.

The Thomas Cup signifies the world’s highest achievement in the sport of badminton. The cup was donated in 1939 by Sir George Thomas for a series of men’s international team competitions to be managed by the International Badminton Federation (IBF). The first tournament was held in 1948–49 and won by Malaya. Thomas Cup tournaments are held every two years. Line-ups in the Thomas Cup continued to consist of three singles players and two doubles teams, but each now played a single match against the opposing team’s counterpart.

It is a great historic achievement for Indian badminton as the men’s team won their first-ever Thomas Cup title, beating 14-time champions Indonesia 3-0 in a heroic effort in the finale of the prestigious Thomas Cup championship in Bangkok, Thailand on Sunday, May 15. Before this, India had never reached the final of the Thomas and Uber Cup in the tournament’s 73-year-long history. However, Indian men reached the Thomas Cup semi-finals in 1952, 1955 and 1979 while the women’s team made it to the Uber Cup top-four in 2014 and 2016.

Chants of “Bharat Mata Ki Jai” and the celebratory music of Dhol were echoing throughout the Impact Arena as the young Indian shuttlers emerged all victorious. Praising the Indian team for lifting the Thomas Cup for the first time, Prime Minister Narendra Modi, on Sunday said that the Indian team has written history and their grand win will surely guide the path to future sportspersons. Mr Modi tweeted, “The Indian badminton team has scripted history! The entire nation is elated by India winning the Thomas Cup! Congratulations to our accomplished team and best wishes to them for their future endeavours. This win will motivate so many upcoming sportspersons.”