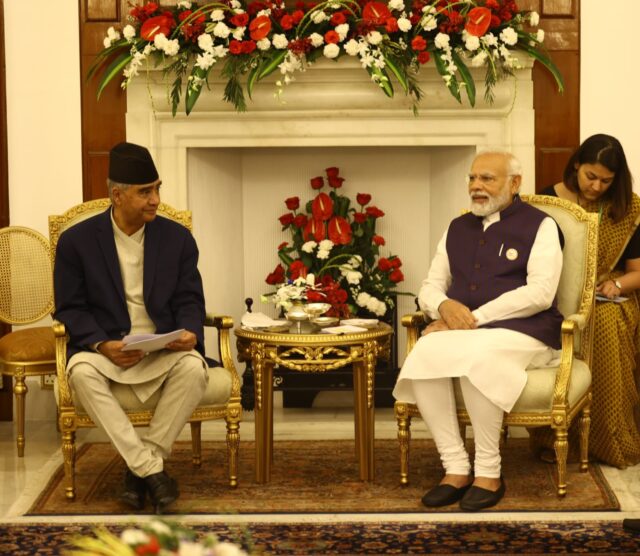 This is Prime Minister Deuba’s first bilateral visit abroad after becoming prime minister for the fifth time in July 2021. Deuba was accompanied by a high-level delegation of four Cabinet ministers holding office in the arenas of foreign affairs, energy, water resources, health and agriculture among others. The two sides reviewed the broad spectrum of the bilateral agenda covering political, economic, trade, energy, security and developmental issues. They also reviewed the progress in the implementation of Indian projects in Nepal, including the cross-border rail links.

Deuba, after he met with Mr Modi, said, “We discussed the boundary issues. And I urged Modiji to resolve through (the) establishment (of) bilateral mechanism.” PM Modi responded by saying, “We also discussed today the issue of open borders of India and Nepal being misused by unwanted elements. We stressed maintaining close cooperation between our defence and security institutions. I am sure that our talks today will prove to be effective in setting ambitious goals for the future of India-Nepal relations.” External Affairs Minister S Jaishankar and National Security Advisor Ajit Doval also met Deuba separately.

The MEA, highlighting the positive impact of this visit said “A joint vision statement on power sector cooperation that spells out the shared commitment, as well as opportunities for win-win collaboration in power generation, transmission and trade, was concluded during the visit. Both PMs jointly inaugurated the 90 km long 132 KVDC Solu Corridor Transmission line and substation built under the line of credit extended by India. Both sides agreed to expedite progress in the implementation of the Pancheshwar Multipurpose Project, beginning with early finalisation of the Detailed Project Report (DPR).”

As part of India’s ‘Azadi ka Amrit Mahotsav’ celebrations, India will inaugurate 75 development projects in Nepal this year. Prime Minister Modi, later tweeted concerning the bilateral meeting, “Held fruitful discussions with PM @SherBDeuba, who has always played a key role in boosting the India-Nepal friendship. We took stock of the full range of bilateral relations including important development projects that will deepen economic as well as cultural linkages.”

Commemorating the diplomatic relationship between India and Nepal, the official handle of India’s PMO tweeted, “The friendship between India and Nepal, and the mutual relations of our people, such an example is not seen anywhere else in the world. Our civilization, our culture, and the threads of our exchange have been linked since ancient times. We have been companions in each other’s happiness and sorrow since time immemorial: PM”