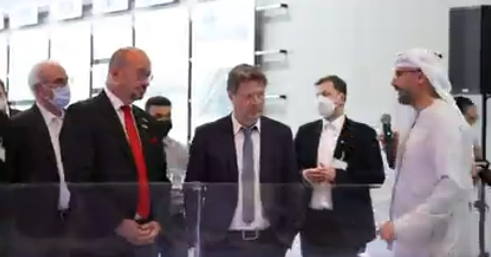 Habeck, Green Party leader and also Germany’s vice-chancellor and economic affairs and climate action minister visited the UAE and Qatar recently. He arrived in the Gulf states with a large business delegation. The attempt of the minister has been to look for alternative supplies of gas and also to work towards a sustainable energy economy. This will help reduce Germany’s dependence on Russia.

The UAE minister said they are committed to the cause and ready to collaborate on low energy emission fuels.

The UAE has been investing money and research into a sustainable future. The government of Abu Dhabi is planning to invest about $163 billion (€148 billion) in a sustainable economy; the country already hosts two of the world’s largest solar power plants.

While agreements have been signed between UAE and Germany, transporting hydrogen is going to be a major challenge in such projects. There will be technical issues in both countries.

Habeck, appeared upbeat about his meetings with the Gulf countries, where he felt that these economies are ready to open up to German companies.

Prior to this Habeck visited the Qatari capital, Doha, where he discussed both sustainable futures as well as the current crisis in Europe.

Habeck met with Qatar’s emir, Tamim bin Hamad Al Thani and their ministers of economy, trade, and foreign affairs. Following the ongoing crisis in Ukraine, Germany has been seeking an urgent supply of gas as sanctions have been imposed on Russia. Habeck and the Qatari Emir agreed to develop a long-term energy partnership.