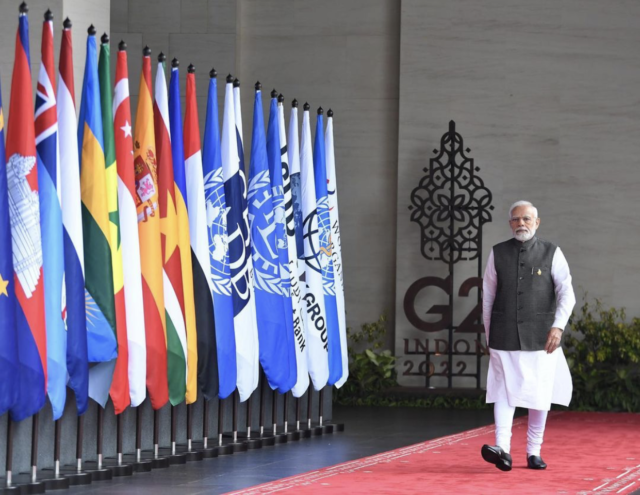 Prime Minister Narendra Modi has traveled to the Indonesian city of Bali to attend the 17th G20 summit and give a brief about India’s evolving G20 priorities that are going on from the 14th to the 16th of November, 2022. The summit is also being attended by British Prime Minister Rishi Sunak, Chinese President Xi Jinping, US President Joe Biden, and French President Emmanuel Macron, among others.

On the margins of the Bali Summit, Prime Minister Modi will review the primary components of bilateral engagement with world leaders. PM Modi will participate in three key sessions at the G20 summit: a session on food and energy security, a session on health, and a session on digital transformation session. The first session has already been attended by PM Modi, who said that India ensured food security for its 1.3 billion citizens and was also successful in supplying food grains to many needy countries during the COVID pandemic. On the issue of food and energy security, particularly in the context of food security, PM Modi said that the present shortage of fertilizers is a big crisis. He went on to say that today’s fertiliser shortage will turn into a food crisis tomorrow, for which the world will have no solution.He urged world leaders to engage in a mutual agreement to keep the supply chain of both food grains and manure stable in the world.

PM Modi discussed India’s efforts in food security, including promoting natural farming for long-term food security and refocusing on nutritious and traditional food grains such as millet.He further addressed the fact that millet can be a solution to address malnutrition and hunger and urged the leaders of the world to celebrate the International Year of Millets with much vigor next year.

Concerning energy security, PM Modi said that India’s energy security is also important for global growth, as it is the world’s fastest-growing economy. There should be no restrictions on the supply of energy, and stability in the energy market needs to be ensured. India is committed to a clean environment and energy. By 2030, half of India’s electricity will be generated from renewable sources. Affordable finance and a time-bound and sustainable supply of technology to developing countries are essential for the inclusive energy transition.

Moreover, PM Modi and other leaders will deliberate considerably on the most important issues of contemporary relevance, including the environment, issues related to energy, the state of the global economy, agriculture, health, and digital transformation.

The summit is particularly special for India as it is holding the presidency of the grouping from December 1, 2022, for one year, and the handover of the presidency will take place during the summit in Bali. As the next chair, India endeavors to provide a greater voice to issues of interest to the global south and steer the G20 agenda in a balanced and representative manner. India’s G20 Presidency aspires to provide new direction, strength, and perspective to G20 discussions on multiple subjects incorporating green development, digital transformation, lifestyles for the environment, inclusive and resilient growth, and women-led development. Moreover, India intends to give a greater voice to the global south in matters of international economic cooperation and also on the need for the 21st century’s reformed institutions, which are considered to be significant.

The G20 is a premier forum for international economic cooperation between multiple nations, which plays a crucial role in shaping and strengthening the global governance and architecture of all major international development and economic issues. 85 percent of the global GDP, two-thirds of the world’s population, and over 75 percent of global trade are represented by the G20 members.

Official sources have said that Modi will be involved in around 20 engagements during his nearly 45-hour stay in Bali and also hold several bilateral meetings with around 10 world leaders. PM Modi has also addressed and interacted with the Indian community and friends of India and Bali at the reception for the Indian community, which was scheduled for November 15, 2022.