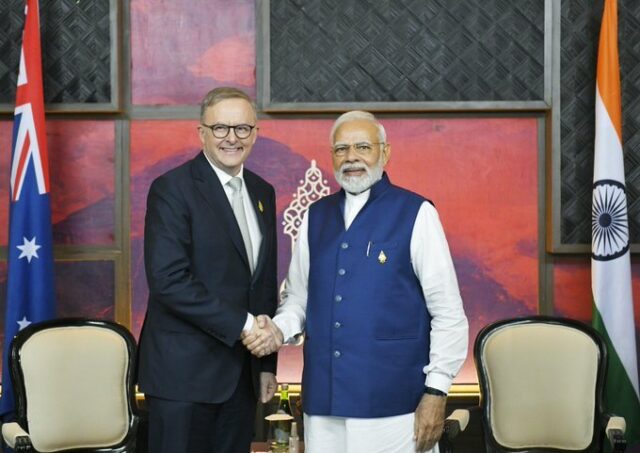 On the occasion of India assuming the Presidency of the G20 for the year 2023, Australia’s High Commissioner to India, Barry O’Farrell, congratulated India and said that Canberra looks forward to working in close ties with the nation over shared objectives. He further said that it is a momentous occasion for India as it has taken over the G20 Presidency and would work closely together for the progress of the theme “One Earth, One Family, One Future.”

As India assumed the G20 Presidency on December 1, 2022, it has a unique opportunity to contribute toward the global agenda on pressing issues of international importance. The G20 is a premier forum for cooperation in the international economic sphere, which represents around 85 percent of the global GDP, two-thirds of the world’s population, and over 75 percent of worldwide trade, according to a press release from the Prime Minister’s office.

In response to the Australian envoy, Prime Minister Narendra Modi tweeted that India is looking forward to working on encouraging sustainable lifestyles, and depoliticizing the global supply of food, medical products, and fertilizers, among other subjects.

During India’s Presidency of the G20, the nation will hold about 200 meetings in 32 different sectors in multiple locations across India. The G20 summit, which will be held next year, will be one of the most high-profile international gatherings to be hosted by India. Prime Minister Modi has also unveiled the logo, theme, and websites of India’s G20 Presidency through video conferencing. The lotus in the logo has symbolized the ancient heritage, thought, and faith of India. He further said that the philosophy of Adwait emphasizes the oneness of all creatures, and this philosophy will become the medium of resolution for the conflicts of the recent world. The logo and the theme that India has adopted represent many key messages from India.

Prime Minister Modi went on to say that through the G20, India is taking Buddha’s message of peace and Mahatma Gandhi’s solutions to violence to new heights.He went on to say that India’s G20 presidency comes at a time of crisis and chaos.The world is fighting with the aftereffects of a once-in-a-century global pandemic, economic uncertainty, and conflicts. The lotus in the logo of the G20 is thus a symbol of hope in such tough times.

The External Affairs Minister of India, S. Jaishankar, said that New Delhi would like to utilize the presidency of the G20 group to reflect the interests and concerns of the global south today.

Incidentally, India and Australia are increasingly working together as strategic and economic partners. The India-Australia Economic Cooperation and Trade Agreement (Ind-Aus ECTA) will enter into force on December 29, which will pave the way for the elimination of duties on 100 percent of tariff lines and create an additional 10 lakh jobs in India.