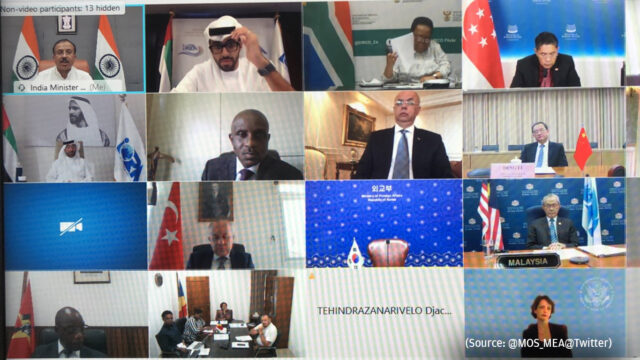 December 19, 2020: In a virtual meeting hosted by the United Arab Emirates (UAE) the nations in Indian Ocean Rim Association (IORA) agreed to include France as the IORA’s 23rd Member State, on the basis of Réunion Island.

The 20th meeting of Council of Ministers (COM) was inaugurated by His Highness Sheikh Abdullah bin Zayed Al Nahyan, Minister of Foreign Affairs and International Cooperation of the United Arab Emirates on December 17. The ministers from 22 Member States and 10 Dialogue Partners of IORA meet to discuss “a peaceful, stable, and prosperous Indian Ocean region.” Chaired by His Excellency Ahmed Ali Al Sayegh, UAE Minister of State, this was the first time a COM was held virtually.

“India welcomes our strategic partner #France as the 23rd member of #IORA.Yet another platform for our two nations to work together for a secure, peaceful and prosperous Indo Pacific Region,” read the tweet by Embassy of India in France.

IORA was established in 1997 with adoption of the Charter of the Indian Ocean Rim Association for Regional Cooperation. It is focused on sustainable growth and balanced development among the members. The priority areas of IORA are maritime security, trade and investment facilitation, fisheries management, disaster risk reduction, academic and scientific cooperation and tourism promotion and cultural exchanges.

France joined IORA in 2001 as dialogue partner and aspired to get full membership. France is the only country in IORA  without mainland presence in the Indian Ocean region. Réunion Island is a French overseas territory innEast Africa near Madagascar.