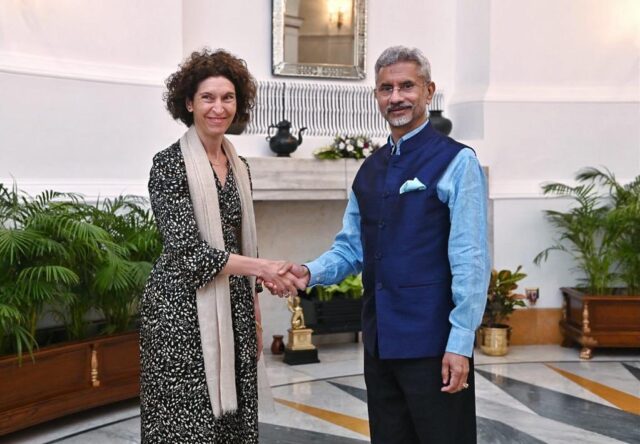 The Minister of Foreign Affairs of the Principality of Andorra, Ms. Maria Ubach Font, paid an official visit to India from the 31st of July to the 1st of August 2022. Her visit was the first-ever official bilateral and the first-ever Foreign Minister-level visit between the two nations since Andorra and India established diplomatic ties in 1994.

Dr. S. Jaishankar, the External Affairs Minister of India, held bilateral dialogues with the Foreign Minister of Andorra. Both ministers reviewed the entire gamut of the India-Andorra bilateral relationship. Both Ministers felicitated the opening of an Indian Honorary Consulate in Andorra la Vella, the capital of the Principality of Andorra. The ministers also agreed upon holding regular Foreign Office Consultations henceforth.

Dr. Jaishankar thanked the Foreign Minister of Andorra, Ms. Maria Ubach Font for her support of India’s positions and candidatures at multilateral fora. The EAM congratulated Andorra for their successful leadership on the UN Mountain Partnership initiative and admission to the International Monetary Fund. Both ministers discussed Andorra’s efforts to upgrade its relationship with the European Union. Apart from exchanging views on regional and global concerns of mutual interest, they also deliberated on the Ibero-American cooperation and the Ibero-American Summit which was last held in Andorra la Vella.

During the bilateral dialogue and meeting, the Ministers signed a Joint Declaration of Intent for Friendship and General Cooperation. This Joint Declaration charts out the framework for cooperation between the two countries in the fields of education, science, culture, information, sports, youth, tourism, diplomacy, health and other sectors. Both country representatives also agreed on encouraging the conclusion of agreements in specific fields of mutual interest in the future.

After the Foreign Minister-level meeting, Ms. Maria Ubach Font also met the Vice Chairman of NITI Aayog, Shri Suman Bery and discussed ‘Agenda 2030’, SDGs and how India and Andorra can further collaborate on tackling challenges like Climate Change that are affecting the whole world.  She interacted with industry representatives at CII and also delivered a talk at the Sushma Swaraj Institute of Foreign Service on “The challenges of a European microstate in the context of the new international arena”.

The EAM was delighted to welcome the Andorran Foreign Minister for the first-ever ministerial level official visit from Andorra to India. He tweeted, “The Friendship and General Cooperation Agreement that we signed today will further enhance our cooperation in political, economic & commercial, health, tourism and other domains.”

As reported by the Ministry of External Affairs, Ms. Maria Ubach Font’s visit is of historical significance and reflects India’s cordial relations with Andorra as well as India’s desire to engage with all States as we celebrate 75 years of independence.