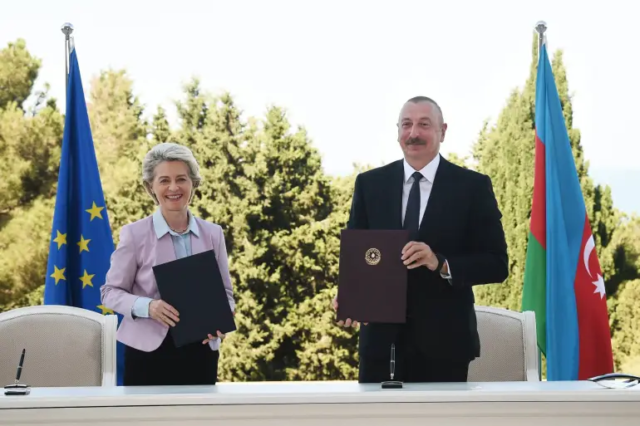 On 18 July 2022, the European Union Commission President Ursula von der Leyen and EU Commissioner for Energy, Kadri Simson met with Azerbaijan’s President Ilham Aliyev and Azeri Energy Minister Parviz Shahbazov to enhance the existing cooperation between the EU and Azerbaijan. The two respective Presidents signed a Memorandum of Understanding on a Strategic Partnership in the Field of Energy. This Memorandum of Understanding incorporates a doubling of imports of Azerbaijan’s natural gas to at least 20 billion cubic metres per year by 2027.

The European Union and Azerbaijan also exchanged a new comprehensive agreement, which will allow for strengthened cooperation in a wide range of areas, including economic expansion, trade and investment, ensuring full utilisation of the potential of civil society, while highlighting the importance of human rights and the rule of law.

Following the signing ceremony in Baku, Ursula von der Leyen said at a joint news conference with Aliyev “Azerbaijan is a crucial energy partner for us that has always been reliable.”

This MoU marks a new beginning in the energy cooperation between European Union and Azerbaijan. President Ursula von der Leyen said that the European Union is looking toward strengthening their existing partnership which “guarantees stable and reliable gas supplies to the EU via the Southern Gas Corridor.” Also, the Commission is laying the fundamentals of a “long-term partnership on energy efficiency and clean energy”, as both, the EU, as well as Azerbaijan, are pursuing the aims of the Paris Agreement. This new deal also intends to contribute to climate neutrality and cooperation on renewable energy.

Azeri President Aliyev emphasised that “issues of energy security today are more important than ever before” and “long-lasting, predictable and very reliable cooperation between EU and Azerbaijan in the field of energy is a big asset.”

The EU’s President Ursula von der Leyen tweeted after the signing of the MoU: “Azerbaijan has a tremendous potential in renewable energy. Today we are laying the ground for a new partnership in this area. And we commit to reducing methane emissions through the entire gas supply chain.”

Both the parties also recognised the importance of the “Global Methane Pledge” and acknowledged that making the natural gas supply chain as efficient, environmentally and climate-friendly as possible is a mutual responsibility.