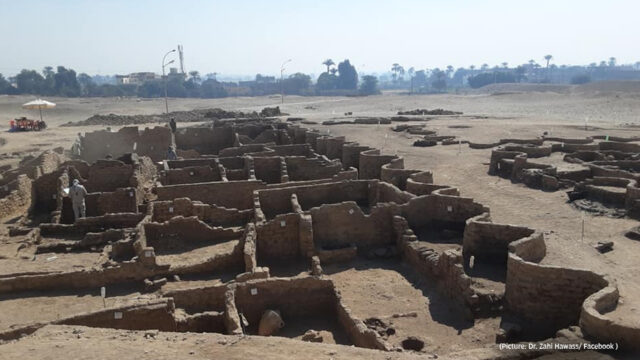 Archaeologists have discovered Egypt’s lost golden city, called “The Rise of Aten” in Luxor, Egypt. The Ministry of Tourism and Antiquities and the team of archaeologists led by Dr. Zahi Hawass announced the discovery on 8 April 2021.

The city was buried under sand for a millennium. The archaeologists found many preserved remains in the city including a bakery with an oven and utensils. The city is well preserved to the point that it seems untouched for a long time and was “left by the ancient residents as if it were yesterday.”

The dating of the city was identified from the bearing seals of King Amenhotep III’s cartouche on several archaeological finds, such as rings, scarabs, coloured pottery vessels, and mud bricks bearing seals.

Archaeologists also discovered a skeleton of a person buried with arms stretched out to the side and rope wrapped around the knees. As per several media reports, this is considered a “remarkable burial” by archaeologists.

“The location and position of this skeleton are rather odd, and more investigations are in progress,” according to the statement released by the team.

The team of archaeologists also discovered jewellery, coloured pottery, scarab beetle amulets and mud bricks bearing seals of Amenhotep III from the site. Two unusual burials of a cow or bull were also found inside one of the rooms, but their purpose is unclear.

As per the statement released by the team, the city was the largest administrative and industrial settlement in the era of the Egyptian empire on the western bank of Luxor.

The statement on the official Facebook page of Dr Z Hawass reads, “The city’s streets are flanked by houses, which some of their walls are up to 3 meters high,’ Hawass continued, ‘we can reveal that the city extends to the west, all the way to the famous Deir el-Medina.”

The city was discovered in September 2020 and the team of archaeologists led by Dr. Zahi Hawass began excavations, between the temples of Ramses III and Amenhotep III near Luxor, some 500km (300 miles) south of the capital Cairo. Soon after excavations started, the team of archaeologists unearthed the site of a large city in a “good condition of preservation, with almost complete walls, and with rooms filled with tools of daily life.”

So far, several areas or neighbourhoods of the city have been uncovered. The bakery was found in the Southern part. The kitchen and food preparation signifies that it must have catered for a large number of people.

The second area is the administrative and residential district. It is larger and has well-arranged units. This area is fenced in by a zigzag wall and has only one access point leading to internal corridors and residential areas. The single entrance is thought to be some sort of security measure. As per the statement, Zigzag walls are one of the rare architectural elements in ancient Egyptian architecture which were mainly used towards the end of the 18th Dynasty.

The third discovered area is the workshop with a production area for the mud bricks used to build temples and annexes on one side. The bricks have seals bearing the cartouche of King Amenhotep III (Neb Maat Ra). As further evidence of extensive activity, a large number of casting moulds for the production of amulets and delicate decorative elements were also discovered.

One of the most interesting findings is of a vessel containing 2 gallons of dried or boiled meat (about 10 kg), with the inscription “Year 37, dressed meat for the third Heb Sed festival from the slaughterhouse of the stockyard of Kha made by the butcher luwy.” This indicates the names of two people that lived and worked in the city and confirms that the city was active and the time of King Amenhotep III’s co-regency with his son Akhenaten. The excavation also revealed a mud seal with inscriptions that read: “gm pa Aton” which means “the domain of the dazzling Aten”, the name of a temple built by King Akhenaten at Karnak.

The 3,400-year-old royal city was built by Egyptian Pharoah Amenhotep III. Egypt’s 18th-dynasty pharaoh Amenhotep III ruled between around 1386 and 1353 BCE. In his final years, his son Akhenaten, also known as Amenhotep IV, is thought to have ruled besides Amenhotep III. Akhenaten later abandoned the city. King Tutankhamun and Ay continued to use the city during their reigns.