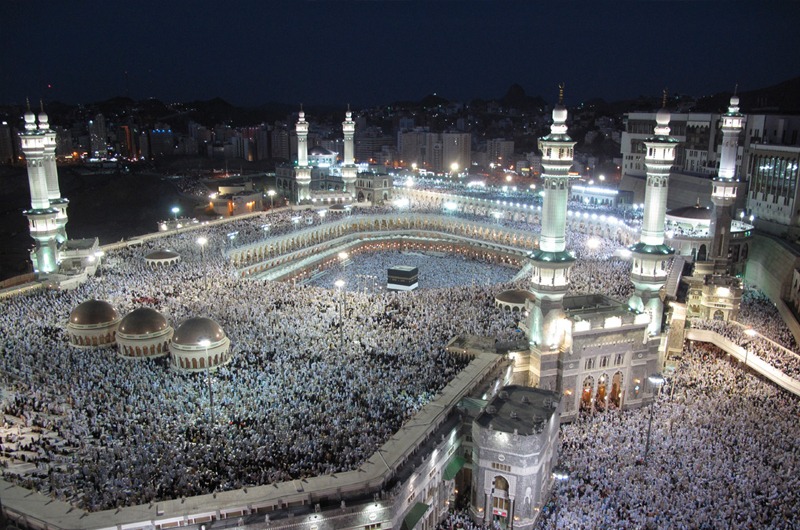 One of the most significant and reverent events in the religious journey of the followers of Islam is the hajj. The hajj is one of the five central pillars of Islam and the most important obligation of the faith, performed once in a lifetime. It is a physically and devotionally challenging journey espoused to purge and tie the larger humanity together for a peaceful and harmonious coexistence.

Located in Mecca, Saudi Arabia, the Kaaba is figuratively the abode of God and stands for unity and oneness in Islamic faith. It is the holiest sanctum in Islam and devout muslims around the globe offer their daily prayers facing towards the Kaaba, all five times in the day.

Wearing face masks, Muslim pilgrims started  arriving in Mecca on Wednesday to embark upon a distinctive and downsized hajj, historically altered by the pandemic. This year the Hajj experience for the pilgrims remains the most different and painstakingly materialised, in the wake of the Covid-19 pandemic.

Most of the adherents could not join their brethren as in a one of its kind incident in Saudi history, the government had inhibited foreign Muslims from entering its premises to undertake the hajj. The decision was a necessary precautionary measure to limit the exposure to the virus in order to prevent its unprecedented global spread.

Saudi infectious disease expert and World Health Organization official, Dr. Hanan Balkhy said, “The kingdom and the world will learn together what are the best ways to mitigate transmission during these types of events.”

Mecca remained sealed before the hajj for months at a stretch with people already in Saudi for the smaller Umrah pilgrimage being sent back home.Only 1,000 denizens of Saudi Arabia were selected to undertake the hajj this year. In addition to this International media also remained banned from covering the hajj and Saudi government broadcasted live footage from the Grand Mosque on Wednesday.

Out of these, two-thirds were the foriegn residents and one-third were Saudi  medical and security personnel. The criteria for the online selection of pilgrims included them falling under the age group between 20 and 50, having no symptoms of the virus and no medical history of terminal diseases. Additionally, first time hajj performers were given preference.

The pilgrimage usually was a site where often families and communities came together to experience the majestic beauty and tranquility of the holy shrine. Over 2.5 million people, including Shias, Sunni and various other Muslim sects, used to pray, dine and rue at the alter in Mecca together.

But this year, the hajj experience was entirely disparate as the pilgrims observed mandatory social distancing while praying; eating pre packaged meals alone in separate hotel rooms. A place that was, for centuries,  representative of swarms of people floating in the fervor of faith, witnessed people being warily mobalisd in small groups of 20 to limit contact.

Pilgrims were also provided with personal prayer mats and water resistant and anti-bacterial attires lined with silver nano technology for the hajj journey, by the Saudi authorities. Towels, sopas, sanistsers and other essentials also formed a part of the sundry items the authorities provided to the pilgrims.

The Zamzam well remained closed for the pilgrims; instead the water from the source was packaged and distributed amongst them this year. Holy pebbles that people used to otherwise pick along the way as an evil eye charm were sterilised and pre-packed this time around. All the expenses incurred by the pilgrims on accommodation, travel and meals were taken care of by the Saudi government, including their healthcare expenditure.

Sheikh Mohammed bin Rashid spells out the Key Priorities for 2023