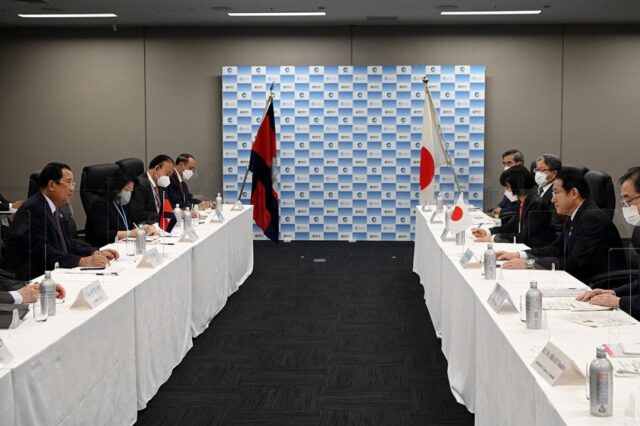 Japan’s bilateral partnership began with Cambodia in 1603. However, the groundwork for their strategic partnership began in February this year when Hun Manet, the eldest son of Prime Minister Hun Sen paid a visit to Tokyo where he presented his credentials as a politician, military commander, and the nominated successor to his father.

Cambodian Prime Minister Hun Sen has asked Japan to upgrade the bilateral relations to a “Comprehensive Strategic Partnership”. Fumio Kishida, Japanese Prime Minister has said that he will consider the proposal, as reported by delegate minister Kao Kim Hourn.

“The two leaders also discussed regional and international issues, including the Myanmar crisis, the Korean Peninsula, and the South China Sea,” the delegate minister said.

Hun Sen’s influence in the West has waned almost to the point of no return and that’s why Japan and its traditional role as a bridge between East and West are re-emerging under Kishida, who took office last September.

On the sidelines of the 4th Asia-Pacific Water Summit, held last weekend, Hun Sen asked Japan to upgrade bilateral relations to a “comprehensive strategic partnership,” a proposal that Kishida has said he would consider.

Looking at the trade situation in Cambodia, this Strategic Partnership could open up markets, provide military training, provide open access to education and enhance academic diplomacy among other key takeaways.

As a result of their diplomatic ties, Kishida too expects Cambodia’s support against the ongoing conflict and the restoration of democracy in Myanmar. Kishida also expects to back peace initiatives on the Korean peninsula and in the much-disputed South China Sea.

On the eve of the Water Summit, corresponding to Hun Sen’s request, Japan’s foreign ministry issued a statement and for the first time in 20 years, it clearly stated that four of its disputed islands remain “illegally occupied” as a legacy of World War II.

Considering Hun Sen’s succession plans, the result of the premier legacy will supposedly fall on the shoulders of Hun Manet and which means that next year’s election will prove pivotal in defining Cambodia’s place in the region for years to come.