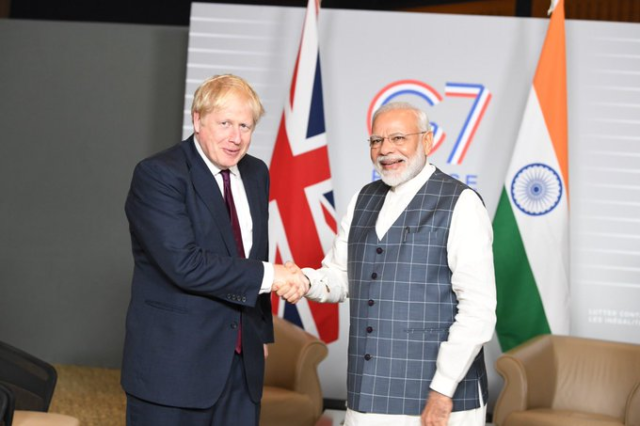 Last month, the two leaders had spoken to each other virtually. During that meeting, Prime Minister Modi had urged Prime Minister Johnson to visit India. One of the key items during the upcoming talks is likely to be Free Trade Agreement (FTA) between the two countries.

Apart from the talks on FTA, the leaders are going to talk about trade, security, and business opportunities. The ongoing crisis between Russia and Ukraine is also likely to be discussed when the leaders meet.

In March, PM Modi reiterated his belief in respect for international law and the territorial integrity and sovereignty of all states, and that these should be the basis of the contemporary world order.

He also appreciated the progress in implementing the ‘India-UK Roadmap 2030’ adopted during the virtual summit between the leaders.

The UK government is yet to make a formal announcement about the upcoming visit.

So far, representatives of the Indian and UK governments have held four out of 26 chapters in the ongoing India-UK FTA negotiations.

Prime Minister Modi and Prime Minister will review the progress made in the negotiations. The leaders might fix a timeline for the possible completion of the FTA negotiations. Earlier it was expected that by the end of 2022 the agreement would be signed.

According to officials, who are aware of the developments, more dialogue is scheduled for later this month and they are expecting a positive outcome.

Prime Minister’s visit, which might happen on 21 and 22 April, will also include interactions with Indian business leaders. There is a possibility to engage in more cooperation in the areas of defence, security, and education.

Apart from the Russia-Ukraine conflict, the leaders will also likely take regional matters, such as the situation in Afghanistan. The UK’s diplomacy in the Indo-Pacific region will also appear in the discussions.

The prime ministers had physically met last year during the COP26 climate summit in Glasgow in November.

Johnson’s expected is long overdue. Earlier two proposed visits were canceled, due to the Covid-19 pandemic in the UK and India.