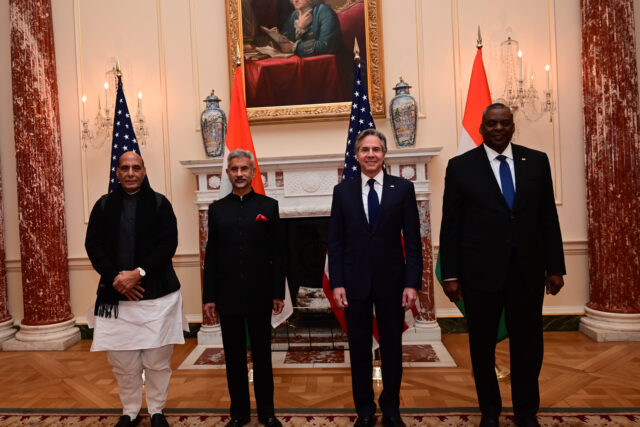 S. Jaishankar, India’s Minister of External Affairs, held a series of high-level meetings during his visit to the United States. Mr Jaishankar was there to attend the “ 2+2 ” high-level ministerial dialogue along with Defence Minister Mr Rajnath Singh. The delegates of the US were led by Secretary of State, Mr Antony Blinken and Defence Secretary Mr Lloyd Austin. This 2+2 meeting was preceded by a virtual meeting between Prime Minister Narendra Modi and President Joe Biden.

Mr Jaishankar also said on Wednesday, that at this point in the ongoing conflict, India was bringing to the process of it, the “goodwill of having relations with multiple parties” such as Russia, Ukraine, Europe, America, “many of the neighbours of Russia and Ukraine”. It is evident from the ministerial dialogue that a lot of time went into discussions on the ongoing crisis. He said India provided its perspective clearly and “the two countries discussed energy crisis, food security and humanitarian assistance to Kyiv” amid the ongoing conflict.

Later at a press conference, Jaishankar responding to one of the questions about Ukraine said, “Obviously a lot of our time went to discussions on Ukraine, there was discussion on US perspectives, their analysis, their sense, what they think is likely to happen. The conflict and diplomacy involved in it — peace talks, progress etc were one set of issues that came up.” He also gave passing references to the impact of the conflict on the global economy.

In response to a question, Jaishankar disagreed with the notion that the situation in Ukraine is going to hurt the India-US relationship. He said, “I don’t think it’ll be stressful on India-US relations. Look, I’m here today. ..I’ve been sort of fairly open and clear about our positions and our perspectives. I would say, in all fairness, so have been the Americans. Today, our relationship has the strength and the comfort level to discuss a lot of issues.” Adding further on, he said, “There has been a huge change in the India-US relationship. And that really allows us to do much more with each other and engage each other in a much different way than we would have done 10 years ago or 20 years ago.”

On Secretary Blinken’s shift to Mr Rajnath Singh, asking him to speak on the status of the India-US relationship, Mr Singh, optimistically said, “We hope to have a free, open, and inclusive rule-based order, which is a common vision that is shared by both our nations.  Our partnership is based on Indo-Pacific, and we want to create peace and prosperity in the Indo-Pacific region.”

The meeting was an energised one suggesting the US and India’s collaborative endeavours towards building what is emerging as a key bilateral relationship in these times.