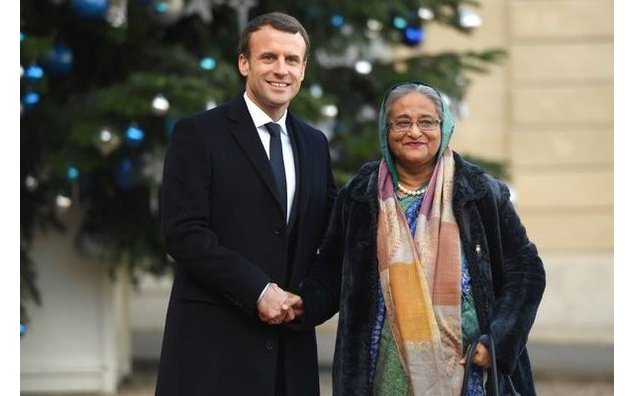 Bangladesh Prime Minister Sheikh Hasina is on a four-day trip to France. Prime Minister Hasina arrived in Paris on 9 November and is scheduled to attend multiple meetings.

The Bangladeshi leader has already met the French President Emmanuel Macron on the date of her arrival. The leaders discussed geopolitical and strategic issues in the Indo-Pacific region.

Commenting on the region, post-meeting, the French President’s office issued a statement, that said: “France and Bangladesh shared the same vision for a free, open, peaceful, secure and inclusive Indo-Pacific region, based on international law and with shared prosperity for all.”

PM Hasina is scheduled to meet the French defence minister during her four-day stay. The leader is expected to attend a session of the French Senate.

The Bangladeshi Prime Minister is expected to attend a meeting with Paris Peace Forum, and will also stop over at the UNESCO Headquarters, to attend the inaugural session of the 75th Founding anniversary of UNESCO and address the session.

Relevance of the Trip

The Bangladeshi Prime Minister who landed in Paris after attending the COP26 Summit is Glasgow, was invited by the French President. The larger aim of the visit would be to deepen socio economic cooperation and partnership.

Since the liberation of Bangladesh, the two countries have maintained close ties, with bilateral trips from government heads and periodic ministerial level talks. Some of the high points of the relationship has been French aid to build dams and manage floods in the South Asian country.

However, last year Bangladesh witnessed protests against President Macron for making “anti-Islamic” comments. The protesters demanded to boycott French products, which was rejected by the Prime Minister.

Going ahead with the trip to France hints at willingness of the Bangladeshi leadership to move on with strengthening diplomatic ties.

Apart from these, French companies are helping Bangladesh with modernizing air transport, and building their first satellite. The French Development Agency is also aiding Bangladesh towards “green and inclusive growth.”

Bangladesh with its strong economic growth is likely to draw investments from different countries, including France. The two countries are also aiming to increase defence cooperation, with talks of acquisition of Rafael aircrafts by Bangladesh. The ongoing visit of the Prime Minister is likely to cement some of the proposed agendas.