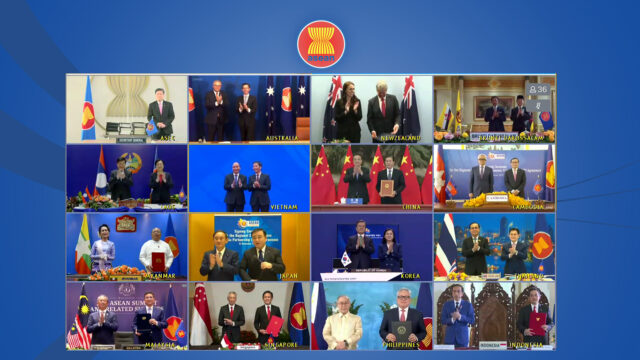 November 17, 2020: 10 members of Association of South-East Nations (ASEAN) along with China, Japan, Australia, New Zealand, South Korea, and Japan signed the Regional Comprehensive Economic Partnership (RCEP) trade agreement on November 15 during the 37th ASEAN summit. The agreement will be effective after ratification by member countries.

The agreement was signed virtually at the summit hosted by Vietnam.

“The signing of the RCEP Agreement is a historic event as it underpins ASEAN’s role in leading a multilateral trade agreement of this magnitude, despite global and regional challenges and eight years of negotiations,” said Dato Lim Jock Hoi, Secretary-General of ASEAN in a statement.

Considered a historic step, the RCEP marks ASEAN’s biggest free trade pact to date. It  covers a market of 2.2 billion people with a combined size of US$26.2 trillion or 30% of the world’s GDP. RCEP was first conceived in the 2011 Bali Summit of ASEAN. Negotiations of RCEP started in 2013, and were led by Iman Pambagyo, Director-General of Indonesia’s Ministry of Trade with support provided by the ASEAN Secretariat.

As per the official statement of ASEAN, the RCEP  “will improve market access with tariffs and quotas eliminated in over 65% of goods traded and make business predictable with common rules of origin and transparent regulations, upon entry into force. This will encourage firms to invest more in the region, including building supply chains and services, and to generate jobs.”

A joint statement released by the leaders of RCEP indicated that leaders see the signing of RCEP as demonstration of their commitment to “open, inclusive, rules-based trade and investment arrangement”. They also emphasised the role of the agreement in fighting COVID-19 pandemic.

India was part of earlier negotiations, but decided to back out in 2019 after her key concerns were not addressed.  India will have to re-apply for membership negotiation if India’s stance changes in future. A minister’s declaration adopted by the initiative of Japan states that RCEP Agreement is open for accession by India as per the provisions of Article 20.9 (Accession) of the RCEP Agreement. India can participate as an observer in the proceedings of RCEP.

China, a key player in the region, has been touted as a major beneficiary of the agreement. Global Times, an English subsidiary of People’s Daily, carried an article which said “India may miss a new round of regional industrial reconstruction and the fast lane of economic recovery.” Another Global Times editorial criticised media reports of the agreement being ‘Chins-led’.

“they only see that China is in this agreement while the US is not, thus ignoring the RCEP’s rich and true constructiveness to the whole region and misunderstanding China’s interaction with the world in the 21st century,” the editorial stated.

China’s premier Li Keqiang in his speech regarded the agreement as “a victory of multilateralism and free trade.” He also expressed that the “RCEP agreement also will emerge as an important engine for global economic development.”

The Presence of the USA in the Shia Crescent