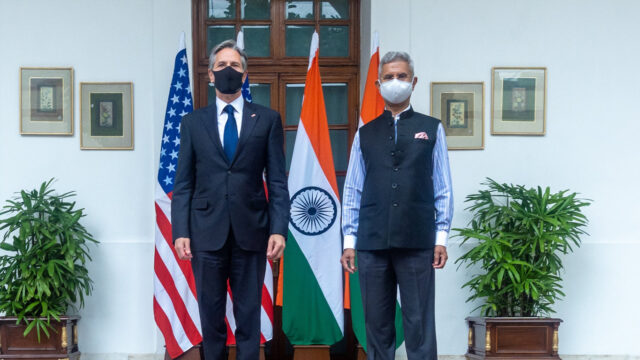 The American Secretary of State Anthony Blinken met with the Indian Minister for External Affairs S Jaishankar, to discuss the prospects of enhancing the ties between the two countries. Some of the areas focussed upon were the UN-India Comprehensive Global Strategic Partnership, Indo-Pacific cooperation and other avenues of working together to promote mutual interests and shared values. As the two countries move forward to overcome the difficulties of the pandemic, the shared democratic spirit acts as a bridge between the value system for both the countries. Secretary Blinken did call the two countries the “leading democracies” of the world and the meeting was a corroboration for the vision that they share.

Highlights of the Meet

The Indian Minister for External Affairs mentioned in his press note that both the countries had spoken of the regional concerns, multilateral institutions, and global issues. He specifically pointed towards Afghanistan, the Indo-Pacific and the Gulf. There were some specifics emphasised amongst those.

Democracy emerged as a major binding factor between the thought processes of both the countries. As leading democracies, both the countries strive to improve in every aspect. Secretary Blinked suggested that both the countries could learn from each other because they too like any other democracy had shortcomings. The democratic ideology was prescribed at the national level as well in terms of boundaries with respect to territorial as well as a means of operation on a general level. Both the representatives discussed the critical scenario in the Southeast Asian country Myanmar and shared their opinion about the need for democracy to prevail.

Climate Change has been a constant concern for countries all over the world. Secretary Blinken accepted that India and the US were two of the largest carbon emitters but also mentioned how they were leading the movement to deal with the climate crisis as well as the drive to promote the concept of green economy. The initiatives to be taken within the Agenda 2030 Partnership launched by Indian Prime Minister Narendra Modi and the American President Joe Biden was discussed too. It intends to achieve the Paris goals and promotes clean energy and finance mobilisation tracks. Both India and US are propagators of contributing to a global movement to help the cause.

Medical Diplomacy emerged as a much more important leg of the diplomatic exchanges than ever before since the pandemic challenged all the countries in similar ways. It emerged as an important tenet for deciding the future of bilateral relations between any two countries. The way in which the supply chain between India and US was maintained for the vaccine production and other raw materials too was clearly discussed. The two ministers spoke of working together to expand the vaccine production to help increase its access as well as affordability. The two countries have helped each other during the pandemic in different ways and in difficult times.

Afghanistan has been a constant concern since the US President Joe Biden announced the decision to withdraw from the country. As India and US have stakes in Afghanistan, it was imperative to discuss it. Both acknowledged the need for all the parties involved to take the peace negotiations seriously. They both hope for a stable, peaceful, and secure Afghanistan and resolved to take steps to help the people there as well as take steps to support the regional stability. Both the sides also expressed their support for a government in Afghanistan representing the people and not military. That will be in the interest of all as counter-terrorism activities rank high in the national policies of other countries too.

Global Order based on basic understanding of the system of responsibility and duty what India and US believe in. Being democracies, India and the US support the freedom of speech and expressions. But they also have faith in an international system of law and order. Thus, the efforts to strengthen the international law and order via different means were discussed. Their commitment to democratic and peaceful transition in Myanmar, affiliation to Quad, participation in G7, support for ASEAN initiatives, cyber issues, education, understanding of maritime security and a peaceful development all over the world in general.

Prospects of the India-US Alliance

India and the US have common interests in more than one ways. Their closeness has been the result of shared values as well as external factors. Whether it is the respect for democracy, human rights or voicing concerns against international violations, or the rise of China, India and US came together and started working on initiatives at various levels. From people to people connects to high level exchanges, there is always a scope for more in the resource rich countries. The meeting between the Indian External Affairs Minister and the US Secretary of State highlighted the intention of both the countries to work together not just as allies but as responsible powers of the world. The issues covered the challenges being faced by the world today.

Currently, amidst the complicated global dynamics, it is important that such meets translate into substantial measures to help ease out tensions. Secretary Blinken mentioned the high hopes for the Indian presence at the 2+2 Dialogue to be held in Washington later this year. The two countries are definitely involved in much more than just domestic politics and that can prove to work in favour of international peace and order definitely. It was rightly observed during the press meet that if India and US work closely, the world will be safer.