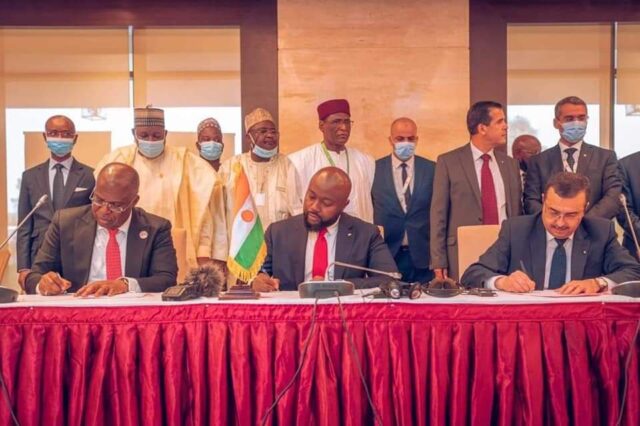 Algeria, Niger and Nigeria on the 28th of July signed an MoU which aims at piping gas across the Sahara to Europe. The three countries had talks in June about the revival of this decades-old project. This project also serves as a potential breakthrough for Europe to diversify its gas sources. After their June meeting, all the three countries set up a task force for the project and assigned a body to check the possibility of the project, as spoken by Niger’s oil ministry following the two-day meeting in Nigeria’s capital, Abuja.

It is estimated that the Trans-Saharan gas pipeline will be a $13 billion project which will have the potential to send up to 30 billion cubic metres a year of gas supplies to Europe. The gas pipeline project will help Europe in diversifying its sources of natural gas supply and will also allow several African nations to access the high-value energy source.

This idea was first conceived and proposed more than 40 years ago and an agreement was signed between the countries in 2009, however, it kept getting stalled. On the 28th of July, however, Algeria, Nigeria and Niger met again to build on their discussions from June, 2022. The three countries signed a memorandum of understanding to hasten the building of this natural gas pipeline across the Sahara desert.

Algeria’s energy minister Mohamed Arkab told the reporters, after the signing ceremony, that the three countries will continue to hold mutual discussions to complete the project as quickly as possible. He also stated that this “meeting follows two previous meetings respectively in Niamey in February and in Abuja in June,” and the trilateral partners have “taken a number of decisions and [they] are making remarkable advance in the construction of this strategic project.”

According to Algeria’s Ennahar TV, the pipeline is designed to be of a length of 4000 kilometres (2,565 miles) starting in Warri, Nigeria, and ending in Hassi R’Mel, Algeria, where it would connect to existing pipelines that run to Europe.

The signing ceremony was held in Algiers, the capital of Algeria, in the presence of the Energy Ministers of the three African countries, and came in the backdrop of the trilateral meeting on the Trans-Saharan Gas Pipeline (TSGP) on Thursday, a news agency named ‘Xinhua’ reported.

After Algeria and Niger opened their borders in the year 2021, Algeria alone exported 54 billion cubic meters of gas, primarily to Italy and Spain. It is expected that this project will provide fresh momentum to Europe-Africa relations.