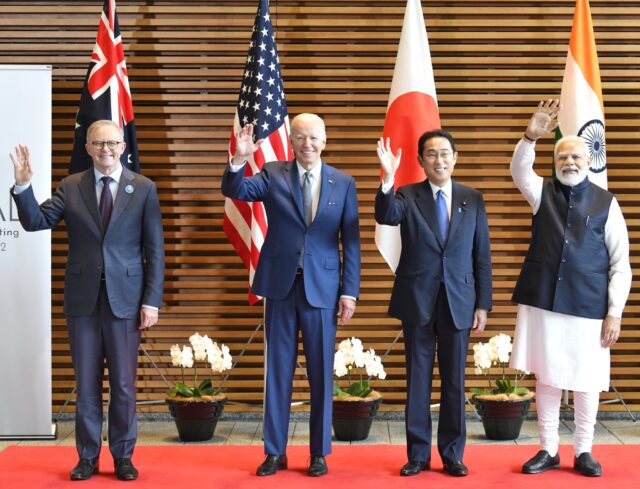 Prime Minister Shri Narendra Modi participated in the Quad Leaders’ Summit held in Tokyo, Japan on the 24th of May 2022, along with his counterparts, the Prime Minister of Japan, Fumio Kishida, President of the United States of America, Joseph Biden and the Prime Minister of Australia, Anthony Albanese. This summit was the fourth interaction of the leaders since their first virtual conference in the March of 2021, the Summit held in Washington D.C in September 2021 and their virtual meeting in March, this year.

The leaders recapitulated their mutual commitment to a free, all-inclusive and open Indo-Pacific. They also discussed the significance of upholding the fundamental principles of sovereignty, territorial integrity and peaceful resolution of disputes. Views were exchanged on developments in the Indo-Pacific and about the ongoing conflict in Europe. Prime Minister Modi underlined India’s consistent and unwavering position on the need for the ceasing of hostilities and the resumption of diplomacy and dialogue.

Quad leaders agreed on the need to combat terrorism and also “denounced the use of terrorist proxies and emphasized the importance of denying any logistical, financial, or military support to terrorist groups which could be used to launch or plan terror attacks, including cross-border attacks,” an MEA report stated.

Considering the ongoing battle with the Covid-19 pandemic, the leaders welcomed the enhanced manufacturing capacity of the Biological-E facility in India and called for the swift and speedy grant of EUL approval by the WHO. The Quad leaders also acknowledged the gift of 525,000 doses of Made in India vaccines by India to Thailand and Cambodia in April 2022 under the QVP (Quad Vaccine Partnership).

Q-CHAMP, a Quad-Climate Change Action and Mitigation Package was declared to boost the efforts towards “green shipping, clean energy including green hydrogen and climate and disaster-resilient infrastructure,” as reported by the MEA.

MEA also stated that “a Quad Partnership on Humanitarian Assistance and Disaster Relief (HADR) for the Indo-Pacific was announced by the Leaders to enable more effective and timely responses to disasters in the region.”

All the leaders discussed their unflinching support for ASEAN and the importance of ASEAN unity. Prime Minister Modi put emphasis on the significance of delivering on Quad’s positive and constructive agenda which will prove beneficial to the region. The Quad leaders have agreed to continue their dialogue in the next Quad summit hosted by Australia in 2023.