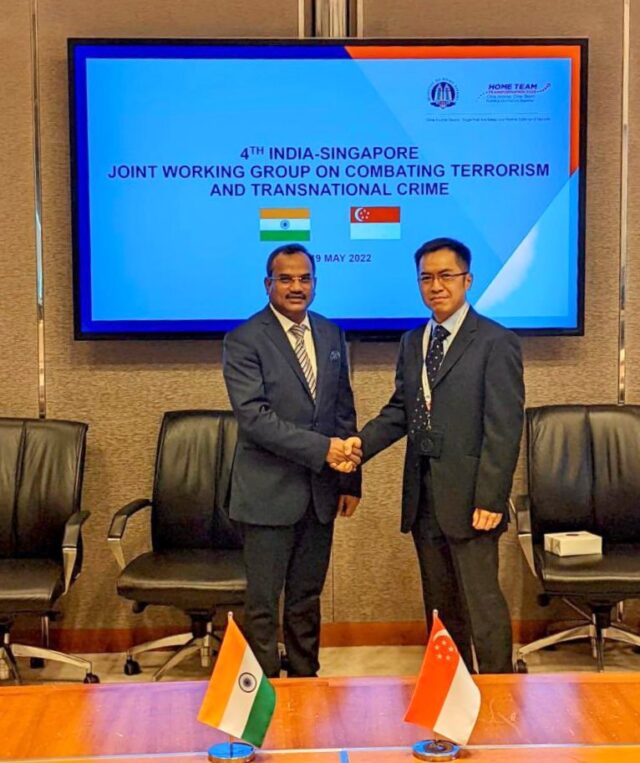 The fourth session of the Joint Working Group (JWG) was held between India and Singapore on countering terrorism and transnational crime. It was conducted in Singapore on the 18th and 19th of May, 2022. The meeting was co-chaired by Mr. Mahaveer Singhvi who is the Joint Secretary for Counter-Terrorism at the Ministry of External Affairs of India and Mr. Puah Kok Keong who is the Deputy Secretary (Policy) at the Ministry of Home Affairs of Singapore.

Joint Working Group meetings between India and Singapore are a result of PM Shri Narendra Modi’s official visit to Singapore from 23 to 24 November 2015. It was then, that, both Prime Ministers held substantial talks pertaining to areas of mutual interest and India and Singapore in the backdrop of the 50th anniversary of India-Singapore diplomatic relations, both sides welcomed the setting up of a Joint Working Group (JWG) between the Indian Ministry of Commerce and Industry and the Singapore Ministry of Trade and Industry to address bilateral trade and investment issues.

Both sides also put emphasis on the need to enhance international cooperation to counter terrorism in an elaborate manner. The Joint Working Group meeting stressed that all countries must take immediate and prolonged action to make sure that no territory under their control is used for terrorist attacks on others and agreed on the urgent necessity to bring those involved in the act of terrorism to justice immediately.

The JWG discussed the present day counter-terrorism challenges, including “cross border movement of terrorists, countering radicalisation, combating the financing of terrorism and tackling terrorist use of the internet,” MEA reported. Views on national, regional and global terrorism potential threat assessments were also discussed during the fourth JWG meeting. Transnational organised crimes like cybercrimes, drug trafficking, etc. were also a matter of grave concern. One of the many important discussions was also on the deepening of cooperation in multilateral fora such as the UN, ASEAN (Association of Southeast Asian Nations) and the FATF (Financial Action Task Force).

The MEA also said “India and Singapore are committed to further cooperation and collaboration between their respective agencies, particularly in sharing information and best practices, law enforcement, and capacity building to counter-terrorism and transnational crimes.”