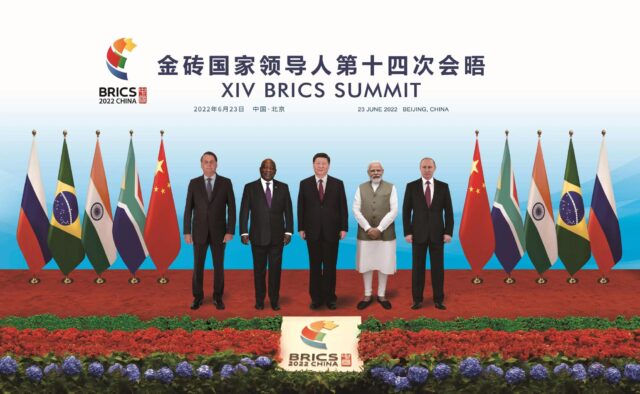 The 14th BRICS Summit was held in a virtual format and was hosted by China from 23rd to 24th of June. The topic for the meeting was “Foster High-Quality BRICS Partnership, Usher in a New Era for Global Development.” The BRICS Summit serves as a platform for the discussion and deliberation on issues of mutual concern for all the participating countries. Prime Minister Shri Narendra Modi led India’s participation at the 14th BRICS Summit, congregated by the host, President Xi Jinping of China from 23rd to 24th of June 2022, in a virtual format. Brazil’s President, Mr. Jair Bolsonaro, President Vladimir Putin of Russia, and the President of South Africa, Mr. Cyril Ramaphosa also participated in the Summit on the 23rd of June. The High-level Dialogue on Global Development, the non-BRICS engagement component of the Summit, was held on the 24th of June.

In the Summit, the respective leaders held talks on areas like Counter-Terrorism, Trade, Health, Traditional Medicine, Environment, Science, Technology & Innovation, Agriculture, Technical and Vocational Education & Training, and also key issues in the global context, including the reform of the multilateral system, COVID-19 pandemic, global economic recovery, amongst others, as per a report by the MEA.

Prime Minister Modi called for the strengthening of the BRICS identity as a collective whole and proposed the establishment of an online database for BRICS documents, the BRICS Railways Research Network and further boosting of cooperation between the Micro-Small and Medium Enterprises.

India will be organizing the BRICS Startup event this year to strengthen and enhance the connection between multilateral start-ups in all BRICS countries. BRICS Leaders adopted the ‘Beijing Declaration’ at the conclusion of the Summit.

In the High-Level Dialogue on Global Development which was held on the 24th of June, Prime Minister Modi underlined the development partnership of India with Africa, Central Asia, South East Asia and from the Pacific to the Caribbean as well as India’s focus on a free, open and all-inclusive maritime space. Prime Minister Modi also highlighted India’s respect for territorial integrity and sovereignty of all nations from the Indian Ocean Region to the Pacific Ocean. Prime Minister Modi suggested reforms in the multilateral system, as large parts of Asia, all of Africa and Latin America are still struggling to find a voice in global decision-making.

President Vladimir Putin of Russia suggested that it is important for “BRICS to expand cooperation with regional associations like ASEAN, the African Union, the Association of Caribbean States, the Gulf Cooperation Council and the Indian Ocean Rim Association” as many serious issues on the global agenda can easily be resolved by pooling efforts. President Putin also noted that this summit was an example of constructive and collaborative work in this respect.

President Xi Jinping of China also reiterated the same ideas and talked about the further enhancing and reforming of global governance, the need for all countries to cooperate in promoting and protecting human rights and fundamental freedoms under the principles of equality and mutual respect, working in solidarity to combat COVID-19, safeguarding peace and security, promoting economic recovery and sustainable development by continuing to enhance macro-economic policy coordination, deepening economic practical cooperation, challenges facing trade and investment developments in the digital era.