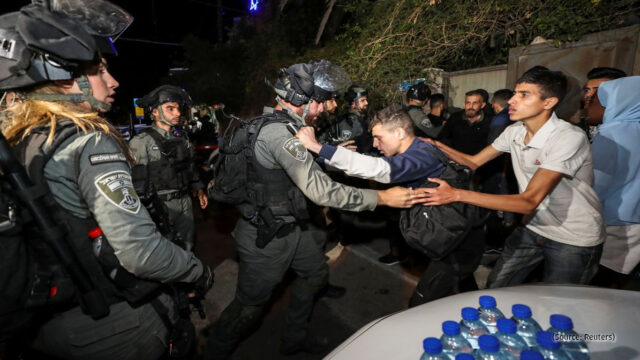 Violent clashes erupted between Palestinian protestors and Israeli police in East Jerusalem after the Jerusalem District Court gave verdict to evict six Palestinian families in Sheikh Jarrah, East Jerusalem to make way for Israeli settlers. The matter is pending for verdict in the Supreme Court of Israel.

The clashes first started on May 6 which then followed with further clashes between Israeli and Palestinian nationalists near Al-Aqsa mosque. On May 8, night of Laylat al-Qadr observed by Muslims further clashes ensued. Some media outlets reported protesters waving Hamas flag and pelting stones. The Israeli Police reportedly used tear gas in response. On May 9, the Israeli forces stormed Al-Aqsa mosque, considered third holiest site in the Islam, before the anticipated flag march by Israeli nationalists on Jerusalem Day. As per the Palestine Red Crescent ambulance service reports cited by media, hundreds of people have been injured. The Supreme Court of Israel which was scheduled to give the final verdict on May 10 has postponed the hearing.

The Middle East Eye reported that Palestine’s President Mahmoud Abbas has called the attacks on Al-Aqsa Mosque “a new challenge to the international community”.

While the leaders of the US, the UK, the EU have expressed concerns over the situation developing in East Jerusalem, violence has escalated.

In the most recent series of events,  images and videos of clashes and violence and media reports have started pouring in of the missile strikes launched by Hamas, the militant organisation in Gaza. A viral video doing rounds on social media shows videos of sky lit with rockets supposed to be launched from Gaza over Israel. Israel has also reportedly launched an offensive which has killed several Hamas leaders. Over 400 people have been reportedly injured and more than 80 have died. One Indian citizen from Kerala has also lost her life in the attacks.

India’s Permanent Representative/ Ambassador of India to the United Nations (UN) T S Tirumurti also expressed concern. He condemned all acts of violence, especially rocket attacks from Gaza. He called for immediate de-escalation. He also mourned the  “tragic demise” of an Indian national in Israel.

The decades old Israel-Palestine conflict continues to cause violent conflicts. Jerusalem has the holy sites of both Islam and Judaism. With the heavy burden of the violent and complicated history, Jerusalem has become a sensitive site for violence.

After World War I, the former ottoman empire was carved up among the winners and the British got a region called “British Mandate for Palestine” (1919-1948). In this region people of various religions lived, including Jews and Muslims. This areas is also home to some of the holiest sites in Judaism and Islam. Parallely in Europe, a Jewish nationalist movement was growing and wanted to reclaim Jewish homeland. This aspired Jewish homeland was in the area under British Mandate for Palestine because of the religious significance of the site.  After the holocoust during WWII, a United Nations Proposal suggested the division of area under British Mandate for Palestine and decided to form two states Israel and Palestine. Israel accepted this proposal and declared statehood while the Palestenians rejected this proposal. This led to the 1948 Arab-Israel war. More conflicts and events followed leading to the 1967 Six Day War. Israel won this war and established control over Gaza (from Egypt), West Bank (from Jordan), Golan Heights (from Syria), and Sinai Peninsula (from Egypt). Israel returned to the Sinai Peninsula to Egypt during the 1979 Camp David Accords facilitated by the United States. The relationship of Israel with Arabs gradually improved over the years.  In 2020, the United Arab Emirates and Bahrain also signed Abraham Accords to normalise relations with Israel. However, the Palestine-Israel conflict remains alive.

Meanwhile, Israel started settling its population in the areas occupied during the war. This has been a continuous cause of friction between Palestine and Israel. Various militant organisations like Hamas have cropped up over the years which cause

Sheikh Jarrah is a neighbourhood in East Jerusalem which is disputed by both Palestinians and Israeli settlers. During the 1967 Six Day War, Israel had captured this neighbourhood.

International reactions are pouring in over the situation in Israel.

“As we head into a sensitive period in the days ahead, it will be critical for all sides to ensure calm and act responsibly to de-escalate tensions and avoid violent confrontation,” added Porter.The UN Secretary General  Secretary-General António Guterres also expressed concern. A statement released by his spokesperson on May 11 says, “He is deeply saddened to learn of increasingly large numbers of casualties, including children, from Israeli airstrikes in Gaza, and of Israeli fatalities from rockets launched from Gaza.”