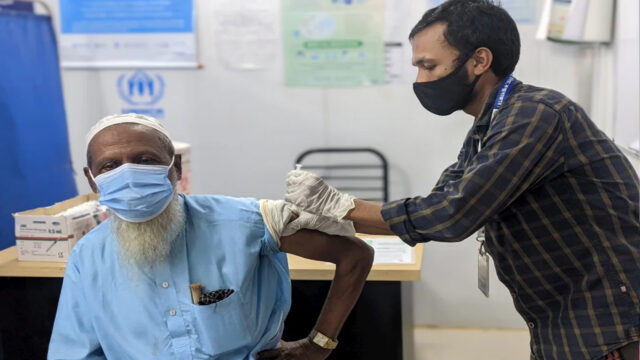 The vaccination drive in Bangladesh Refugee camps began early this week. The drive aims to vaccinate more than 60,000 refugees residing in the camps in the first round. The vaccination programme will continue till 17th August. It has started inoculating those above 55 years of age. In the camps, many front-liners as well as volunteers have been working to help in checking the rising numbers.

The vaccination drive was organised by authorities in Bangladesh in collaboration with UN Refugee Agency, the World Health Organisation and other humanitarian partners for the purpose of technical support among other things. Mahbubur Rahman, the Chief health official in Cox Bazar, said that all the adult Rohingya peoples will be vaccinated in different phases. The phases are being defined as per the age considerations.

The recent heavy rains that caused flash floods and landslides resulted in the displacement of thousands of Rohingya refugees from the camps especially in southeastern Bangladesh. Cox Bazaar, a district known for being the world’s biggest refugee settlement has been severely impacted. Reuters reported that more than 13,000 refugees were forced to re-locate. After the military crackdown in Myanmar in 2017, many Rohingya refugees had crossed the border and settled in that area. Due to the rains and other natural difficulties, there has been severe damage to the general infrastructure like roads, bridges, clinics and the basic modes of commutes have suffered serious impairments.

A report by the United Nations High Commissioner for Refugees stated that an “equitable inclusion of Rohingya refugees” was critical in the allocation of the vaccines to check the spread of COVID 19. The large population, unlikelihood of any kind of social distancing and the difficult natural conditions have resulted in making the situation worse. UNHCR’s Emergency Response Teams , partners, refugee and host community volunteers have been deployed to estimate the damages.

Bangladesh had ordered a strict lockdown in five camps where the Rohingya refugees reside. The decision came after the sharp rise in area. The rate of transmission of the virus was found to be much higher in the refugee camps. The initial vaccination drive in Bangladesh that was launched in February last year did not cover the refugee camps.

It was realised that unless all the people residing in the country get vaccinated, the task of checking the spread is impossible. The areas adjacent to the refugee camps are at high risk of getting infected. The drive that has begun needs to be wide spread and quick as the monsoons will continue to impact the country for a few more months. The infection rate will increase drastically with the rains.