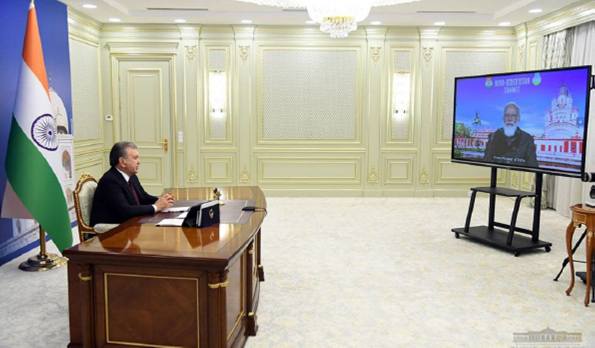 The close friendly relations between Uzbekistan and India have their roots deep in history. India is well-known in Uzbekistan for a long time as the country with rich history and unique culture; the country with which Uzbek people are connected with centuries-old cultural, trade, and economic relations, and, above all – with bonds of sincere friendship.

In March of this year, Uzbekistan and India mark the 30th anniversary of the establishment of diplomatic relations. The Protocol on Diplomatic and Consular matters was signed on 18th March 1992. India was among the first countries to recognize the independence of Uzbekistan.

The strengthening of the long-term strategic partnership with India is one of the priorities of Uzbekistan’s foreign policy. In May 2011, a Joint Declaration on Strategic Partnership was signed between countries. The document expanded the opportunities for boosting the cooperation across a broad spectrum of dimensions, including all aspects of political, economic, cultural-humanitarian spheres, which the two sides consider mutually advantageous.

Relations between Uzbekistan and India have reached new heights

over the last few years. First of all, there are regular and intensive political dialogues between the two leaders, which provides a strong basis for bilateral relations. The state visit by President Shavkat Mirziyoyev to India in October 2018, which resulted in the signing of 20 documents on cooperation in various areas, opened a new page in our relations. The visit of the President of Uzbekistan to India in January 2019 to participate in the “Vibrant Gujarat” global investment summit as a Chief guest confirmed Uzbekistan’s desire to intensify close cooperation with India.

A virtual summit held in December 2020 between the President of Uzbekistan and Prime Minister of India, marked an important milestone and culminated with the adoption of a Joint Statement on Close Friendship and Strong Partnership. Moreover, in the framework of the summit 9 documents on cooperation in different priority areas were signed.

The President of Uzbekistan Shavkat Mirziyoyev and Prime Minister of India Narendra Modi regularly meet on several occasions within the framework of international and regional events.

Active regional and international interaction between Tashkent and New Delhi has become an important part of political dialogue and practical cooperation.

Particularly, the Uzbek side supports India’s candidacy to obtain the status of a permanent member of the UN Security Council. In this context, it should be noted that the sides take a principled position in countering such threats and challenges as terrorism and extremism, drug trafficking, and other transboundary crimes that directly impact on security, prosperity, and sustainable development of the international community.

The Uzbek side actively supported India joining the Shanghai Cooperation Organization, interaction within which becomes an important part of bilateral political dialogue.

The government delegation from India headed by External Affairs Minister Subrahmanyam Jaishankar participated in the high-level international conference “Central and South Asia: Regional Connectivity. Challenges and Opportunities”, which was held in Tashkent on 15-16 July 2021. The Tashkent conference has shown huge opportunities for deepening the political dialogue economic cooperation and people-to-people contacts between the two countries as well as two regions.

India-Central Asia Dialogue initiated by the leaders of the two countries in Samarkand in January 2019 at the level of foreign ministers was a major event. As part of the Dialogue, the India-Central Asia Business Council was established in New Delhi in February 2020, underscoring the practical orientation of interaction. Recently on the 19th of December 2021, the 3rd meeting of Ministerial Dialogue has taken place in New Delhi. The Ministers of Central Asian countries and India discussed current issues of further strengthening relations in political, trade-economic, investment, transport-communication, tourism, cultural-humanitarian, environmental and other areas. The establishment of Ministerial Dialogue «India – Central Asia» opened up a new page in the relations of India with the states of the region.

The current challenging situation in the world related to coronavirus pandemics made bilateral relations even stronger and more effective.

Uzbekistan and India cooperated very closely in evacuating their citizens stranded in the territories of both sides. Both Uzbekistan and India have provided friendly assistance to each other in challenging periods which consisted of very crucial and necessary pharmaceutical products and medical equipment.

Regular dialogue between the leaders of the two countries is added by active contacts at the level of governments, parliaments, and ministries. The 12th session of the Intergovernmental Commission on trade-economic and scientific-technical cooperation and the 14th round of political consultations between the Ministries of Foreign Affairs was held successfully in 2020.

Several high-level exchanges also have taken place last year in the field of defence and security.

The abovementioned and upcoming bilateral events clearly show the serious intention of both sides to further the development of mutually beneficial cooperation.

Nowadays, both nations benefit from favored trade relations. The annual trade turnover between Uzbekistan and India is more than $440 million. Uzbekistan and India have huge untapped potential in terms of further strengthening bilateral cooperation in the spheres of trade and investments. The leaders of the two countries identified the task of increasing the level of bilateral trade to at least $1 billion within a couple of years.

During the last four years, we have witnessed a considerable intensification of trade and economic cooperation with India. The establishment of the Uzbek-Indian Center for Entrepreneurship Development in Tashkent in 2018, Uzbek-Indian Business Council together with the Confederation of Indian Industry – all these are aimed at ensuring intensive trade and investment exchange between business circles of both countries. The Uzbek-Indian Committee for the Coordination and Promotion of Practical Implementation of Bilateral Projects, formed in 2019, is expected to strengthen state support for cooperation.

The interest of Indian investors in Uzbekistan is growing. In particular, strong cooperation has been established in such areas as IT, pharmaceuticals, healthcare, hotel management, production of automotive components, the implementation of joint programs in various areas of higher education.

The government of Uzbekistan creates favorable conditions and welcomes investments by Indian companies in the production of chemical goods, medicines, textile, leather industries, information technologies, and telecommunications. Special attention is given to the implementation of joint projects with Indian companies in Uzbekistan’s free economic zones, including pharmacological FEZs. Moreover, Uzbekistan and India are working on a very promising document for further development of investment partnership – the bilateral investment agreement, which is defined to promote and protect investments.

Another positive dynamic of the development of Uzbekistan – Indian ties is the establishment of direct partnership relations between regions. In this context, cooperation between the Andijan region of Uzbekistan and state Gujarat of India has shown its advantages. It is noteworthy that in a short period several joint projects are already being implemented together with Indian companies in Andijan.

Now sides are working on establishing a similar mechanism of cooperation between Fergana and Haryana.

The establishment of direct cooperation between the regions of Uzbekistan and India is contributing further development of trade and investment relations.

The development of cooperation in the transport and logistics sector is of great importance in promoting cooperation with India. A cardinal improvement of transport and other infrastructure connectivity of the two countries, as well as the Central and South Asian regions, is necessary for ensuring a significant increase in mutual trade and investment.

In this context, the government of Uzbekistan supported India’s accession to the Ashgabat Agreement (on the Uzbekistan-Turkmenistan-Iran-Oman transport corridor). Uzbekistan and other Central Asian countries also support New Delhi’s efforts to develop Iran’s Chabahar port, which is set to become a key transit hub for India’s trade with Central Asian countries. It should be noted till now Uzbekistan, India, and Iran held the 2 rounds of meetings of a trilateral working group on joint use of Chabahar port.

There is considerable potential for cooperation in civil aviation and air cargo transportation. The Indian side proposes opening air corridors to Central Asian countries for transportation of fruits and vegetables, food, and other agricultural products.

Uzbekistan and India have huge potential for further development of cooperation in the field of culture, education, science, innovation, technology, health, and many other directions. A line of new developments has taken place in those spheres too.

At the same time, it is important to note that the Bukhara State Medical Institute named after Abu Ali Ibn Sino (Avicenna) opened its branch at the Indian International University in Noida.

Cultural ties constitute an important pillar of our bilateral relationship. There is an Indian Cultural Centre in Tashkent, which, recently celebrated 25 years of its establishment.

Uzbekistan participated as a “Partner Nation” of the 34th edition of one of the largest festivals in the world “Surajkund International Crafts Mela”, which was held in Faridabad in February 2020. High-level delegations from India are regularly participating in analogical festivals in Uzbekistan.

Large possibilities of enhancing collaboration in culture were discussed during the visit of the President of the Indian Council for Cultural Relations Dr. Vinay Sahasrabuddhe to Uzbekistan in March 2021.

The Cultural Exchange Programme between Uzbekistan and India for the period 2021-25 was signed during the visit of the Minister of state for external affairs and culture Meenakshi Lekhi to Uzbekistan in September 2021.

Folklore band “Aykulash” from Karakalpakstan participated in the “National Tribal Dance Festival” which was held in October 2021 in Chhattisgarh, India.

Cooperation between Uzbekistan and India in the field of tourism is among the priority areas which is going to reach new heights in the post-pandemic era. Majestic architectural monuments of Samarkand, Bukhara, Khiva, and Shakhrisabz are listed in the cultural heritage of UNESCO, picturesque nature and climate, and also the hospitality of the Uzbek people is an integral part of the interests of Indians in modern Uzbekistan.

Undoubtedly, cooperation between Uzbekistan and India has a huge potential and high opportunities thanks to the solid foundations of our relations – centuries-old of friendship, trust, and mutual understanding.