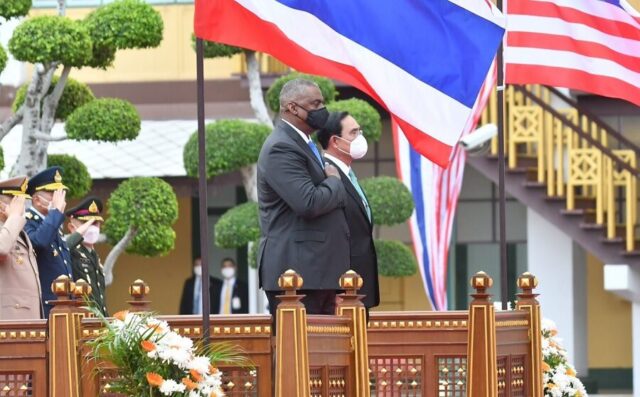 Mr. Lloyd J. Austin III, the Secretary of Defense of the US visited Thailand from June 12-13,
2022 for his first official visit to Thailand as the Secretary of Defense. During his visit,
Secretary Austin met with Thailand’s Prime Minister and Minister of Defence Prayut
Chan-o-cha. He also met with the U.S. defence personnel operating in Thailand.
Resulting of the ‘Treaty of Amity’ the United States and Thailand have developed close
bilateral relations and maintained bilateral treaties in various arenas. Both countries also
cooperate in their participation in the multilateral activities and agreements of the UN.
Thailand and the US have had a long history of shared bilateral ties as was evident in this
official visit of the Defense Secretary to Thailand. On his arrival, he was graciously received
by the host, Prime Minister Prayut at the Kingdom of Thailand’s Ministry of Defence, where
they shared dialogues and views on issues pertaining to regional security and discussed
opportunities which will further enhance the U.S.-Thai alliance.
On his first bilateral visit to Thailand, US Defense Secretary Austin put emphasis on the
United States’ long-standing friendship and cooperation with Thailand and highlighted the
commitment of the US to increase the number of Thai students receiving professional
military training in the United States.
Both, Secretary Austin as well as Prime Minister Prayut warmly welcomed the recent efforts
that have been made to expand bilateral training and exercises, which includes the
establishment of a “new working group” which will focus on reciprocal access and training.
Secretary Austin recapitulated the United States’ desire to strengthen the reciprocity
between Thai and the US forces and also to support Thailand’s requirements towards
achieving modernisation in security.
The two leaders also emphasised priorities for mutual cooperation in newly emerging
technology areas such as cyber and space. The incorporation of cyber and space
cooperation into major bilateral exercises like Cobra Gold was welcomed by both the
delegates and they agreed to continue to cooperate on cyber capacity-building.
Finally, the two shared perspectives on Thailand’s interest in “enhanced defence industry
cooperation”. They also appreciated the recent bilateral defence technology agreement and
the result it has shown and agreed to develop a plan for future collaboration.