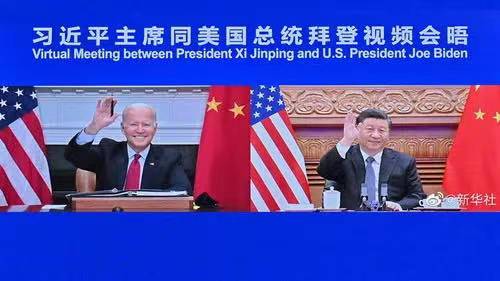 The much-awaited talks between the US President Joe Biden and Chinese President Xi Jinping were held yesterday. And as anticipated Taiwan remained one the main topic of discussions between the two world leaders.

The virtual summit between Biden and Jinping ended with emphasis on the need for “better communication.”

The US President spoke about competition between the two countries should not degenerate into “conflict,” “intended or unintended.” President Biden also said that the sides must engage in “candid” discussion.

President Jinping, while addressing the meeting, said that the rivals must work more closely. The Chinese President addressed to his US counterpart as “my old friend.”

In the closed-door meeting, the US President said the US is opposed to “unilateral efforts” to alter the status quo in Taiwan. The two leaders also discussed other controversial issues such as Beijing’s policy in Xinjiang, Tibet, and Hong Kong and human rights, generally.

According to a Reuters report, the Chinese President reportedly issued a warning to the President Biden on their policy on Taiwan. However, according to a White House release, the US President reiterated about one China policy. The US Policy on Taiwan is guided by the Taiwan Relations Act, the three Joint Communiques, and the Six Assurances. President Biden shared that the US “strongly opposes unilateral efforts” to change the status quo or undermine peace and stability across the Taiwan Strait.

President also spoke about keeping Indo-Pacific region free and open. He added that the US remains committed and determined to preserve the region like that.

The US President also raised certain transnational challenges where interests of the US and China intersects, namely health security.

Among other regional challenges, the two leaders also spoke about the situation in Afghanistan, Iran and North Korea.

On the issue of economic and trade practices, the Chinese leader said that the relations are mutually beneficial and should not be politicized. President Xi expressed concern over the farfetched use of US national security to “suppress” Chinese business interest.

The two leaders have only spoken twice by phone since President Biden’s inauguration. During their yesterday’s interaction, President Xi expressed hope that the US leader will show “political leadership” to guide US policy towards China back to “rational and practical” track. He also remarked about “mutual respect, peaceful co-existence and win-win cooperation,” as the guiding principles to shape the bilateral ties.

The Chinese President compared the two countries as two giant ships in the ocean and cautioned against collision. The leader also added China will not allow use to human rights to interfere in the country’s internal affairs.

On Taiwan, the Chinese leader said, China will ensure “resolute measures” against any forces trying to provoke China, or “force our hand,” or “even cross the red line.”