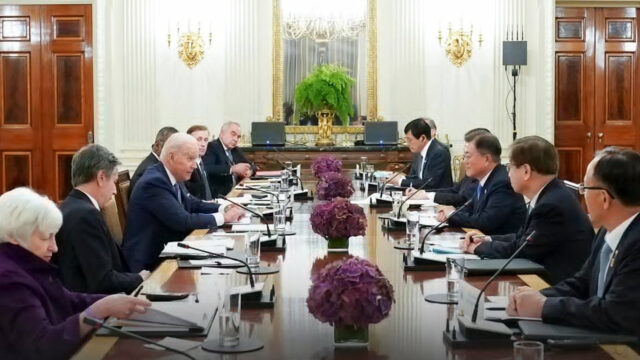 The President of South Korea Moon Jae-in stated that “Korea will closely work with the United States to achieve complete denuclearisation and establish permanent peace on the Korean Peninsula”. He spoke at the Republic of Korea-United States Summit being held in Washington.

North Korea continues to pose a challenge for the international community. On one hand, it defied the nuclear norms set in place. On the other, it has violated the basic order of the world by posing a threat to the security of its neighbours as well as to countries all over the world. There have been many attempts to get North Korea come forward to at least attempt to conform to the International norms. Another instance along similar lines was the recent expression of concern by the leaders of the United States (US) and South Korea about the relations with Pyongyang.

Since the US President Joe Biden took his oath, North Korea has been on his list of things that need attention. The nuclear programme and the way in which Pyongyang has displayed a disregard for the regulations put in place by the global governance institutions has irked several countries. The American President expressed his understanding of how he had no “illusions” about the difficulty involved in convincing North Korea to opt for de-nuclearisation. US and North Korea have not been on great terms after the latter criticised the American “hostile” policy towards it and even threatened with dire consequences. Thus, the decision by US in collaboration with South Korea to appoint a special envoy for North Korea is a depiction of its faith in diplomacy.

The envoy Sung Kim worked in North Korea earlier as well under the former Presidents and understands the nuances of the complex relationship. President Biden in the past hinted about his intentions to address the issue and to bring Pyongyang back to the negotiating table. Biden Administration faces many serious challenges at the moment and North Korea figures high up in the ladder. With its proximity with China and the recent warning about responding firmly to any strict measures taken, Biden’s persistence to opt for a diplomatic measure is laudable. If, Sung Kim succeeds in building the right pressure, then it will be a big win for the International order as a whole due to several reasons. It will be one of the first wins for the US administration without resorting to coercion or violent measures. It will result in adding another country to the global order which was willing to abide by the expectations and norms. It will mean that the nuclear norms will gain the sanctity that it has been known to lose in the last few years.

The announcement by South Korea and the US has led to an optimism among the experts about the leadership of Joe Biden. While the exact terms are not known as yet, if Pyongyang reverts the gesture, things will change for good for all.