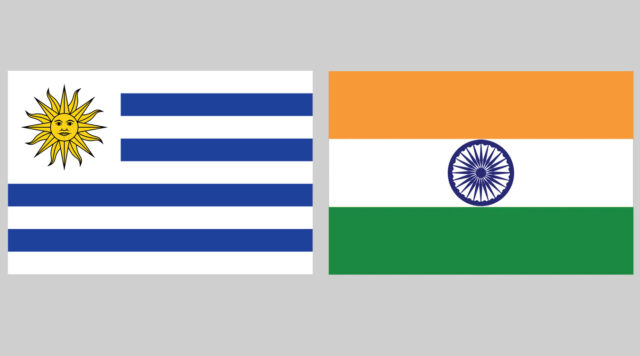 It is only in the twenty-first century that Latin American countries have made a meaningful economic connection with India. After India’s policy of liberalization in the 1990s, trade between India and Latin American countries started increasing but has been focused on the larger countries of the region, such as Argentina, Brazil, and Mexico. This situation is seeing a gradual change. Countries such as Uruguay are looking towards India and are attracting India’s attention as well.

Uruguay’s diplomatic relations with India were formally established when it opened its first embassy in New Delhi in 1960 and, subsequently, a consulate office in Mumbai. When Indian Prime Minister Indira Gandhi undertook a tour of several Latin American countries in 1968, emphasizing deepening political, cultural, and economic ties, Uruguay was included in the visit. India has yet to reciprocate and open a full-fledged embassy in the country, but the Indian Ambassador in Argentina is also accredited with representing India in Uruguay and there is an Honorary Consulate General in Montevideo.

The frequency of government-level interaction between Uruguay and India has been increasing, with the external affairs ministries of both countries taking an active interest from the late years of the twentieth century. This has resulted in foreign office consultations being established since 1999. While the Indian government has made efforts to deepen cultural ties by organizing events such as International Yoga Day and popularizing Indian dance performances, the focus has been more on economic exchanges between the two countries.

Since 2010, bilateral trade between the two countries has been slowly increasing, and this trend is likely to continue. From US$ 73 million in 2010 to US$ 218 million in 2015 (IDB-Exim Bank, 2019), bilateral trade between India and Uruguay increased to US$ 268 million for the years 2020–2021. If these trade figures are compared to those of Uruguay and China in 2020, which was about US$ 2.87 billion, there is tremendous scope for improvement in trade between India and Uruguay.

Uruguay exports largely shorn wool, leather, edible oil, inorganic chemicals, and timber to India; and it imports equipment, machinery, vehicles, organic chemicals, pharmaceuticals, and auto parts from India. As an agricultural-based economy, Uruguay’s exports to India have been largely primary products or food exports. Uruguay, on the other hand, constitutes a market for Indian primary and manufactured products, including pharmaceuticals. Several studies point to South American countries’ reaping significant benefits, particularly during the first decade of the twenty-first century, when demand from countries such as India caused a surge in the prices of primary products exported. Moreover, World Bank studies indicate that policy steps such as diversification of products, branding, and clustering can help these countries overcome this problem.

At the fourth Foreign Office Consultations on bilateral cooperation held between Uruguay and India on November 29, 2021, in Montevideo, the two countries attempted to identify areas in which exchange could be strengthened, including trade and investment. Among the issues discussed at this meeting, cooperation in the information technology sector, pharmaceutical products with access to vaccines and medicines, recognition of Covid vaccination certificates of both countries, response to the COVID-19 pandemic, and strengthening of “people-to-people” ties were included.

According to estimates made by the United Nations Economic and Social Commission for Asia and the Pacific (UNESCAP) and the World Bank (calculated based on export baskets, modes of transport, and trade barriers), the cost of bilateral trade between Latin American countries and India is still very high (an average estimate of about 198%).

Yet another important dimension of relations for both Uruguay and India is the multilateral fora. Both countries have been exchanging views on their respective regional issues and have agreed to strengthen and support each other and coordinate with each other in multilateral and regional bodies. Uruguay is a member of the trade bloc Mercado Comun del Sur (MERCOSUR), which includes the membership of countries like Brazil and Argentina, along with Paraguay. A large proportion of intra-regional trade takes place within MERCOSUR and is thus important for India. On January 25, 2004, India signed a Preferential Trade Agreement (PTA) with MERCOSUR, which became operational in 2009. In Uruguay, tariffs are relatively high on manufactured goods.

Recent discussions during the fourth Foreign Office Consultations between India and Uruguay in November 2021 included working towards a Social Security Agreement (SSA). This has opened up several possibilities as it implies more flexibility in dealing with employees moving across borders and covers a range of issues such as immigration, tax, and social security of foreign nationals in India and Indians overseas.

During the COVID-19 pandemic, Uruguay’s Gross Domestic Product (GDP) contracted by 6.1%, yet the economy recovered by 4.4% by 2021, according to World Bank reports. The pandemic highlighted Uruguay’s strengths as one of the best-prepared countries in the region. Uruguay has a broad social protection network, a resilient health system with universal coverage, and social welfare programmes. The country also managed to transition to distance education and adapted rapidly to a national online learning platform. The students and teachers gained wide access to the Internet allowing them to largely continue their interaction even when schools had to be shut down. Uruguay was perhaps, the first country in the region to allow schools to be gradually opened.

The level of preparedness also allowed for a quick reopening of the economy, giving Uruguay the advantage of reacting to the pandemic at relatively lower costs. Uruguay’s commitment to social welfare and social protection programmes for its workers means that most of the population above 65 years of age is protected under a pension scheme.

India, too, is concerned about worker protection, and in 2008 introduced a new type of classification, the International Worker, to be included in the provident fund or pension schemes. Steps aimed at protecting the interests of workers in foreign countries led to Social Security agreements (SSA). From a social security perspective, SSA is a bilateral agreement signed by two countries to eschew “double coverage” and guarantee equal treatment to workers in both countries.

Uruguay is the second smallest country by area in South America, but it is also known to be an egalitarian and equitable society. With low levels of poverty and high income per capita, it has one of the largest middle classes in the region. It was named “The Country of the Year” in 2013 by The Economist. These are positive indicators for India, which is seeking multiple partners in the global age.

A bilateral relationship between Uruguay and India can be cemented through a Strategic Partnership that India has already signed with three Latin American countries—Argentina, Brazil, and Mexico. In a speech given in November 2019, India’s Minister of External Affairs, Jaishankar, in a speech highlighting phases in India’s evolving foreign policy, seemed to use management concepts in his explanations. This was deemed by commentators to be natural as “business strategy is nothing but the repackaging of military and national strategy”. What India and Uruguay need is their own set of specific agreements that identify their common strategic goals and give them the flexibility to make them operational.