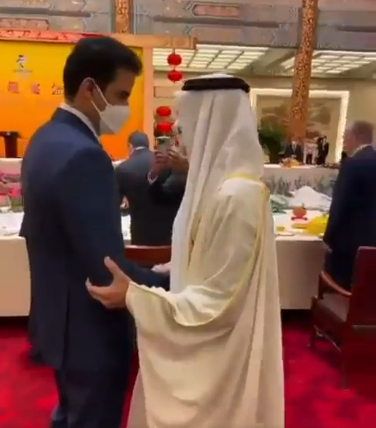 Lunch hosted by the Chinese President Xi Jinping was buzzing when the Crown Prince of UAE and Emir of Qatar met on the sidelines of the meeting. Qatari Emir Sheikh Tamim bin Hamad Al Thani met Abu Dhabi’s Crown Prince Sheikh Mohammed bin Zayed Al Nahyan on 6 February at the Beijing Winter Olympics. This was the first interaction between the two leaders after the dispute between Qatar and four Arab countries ended last year.

The report of the leaders’ meeting was confirmed by Qatar’s state news agency. Media outlets in UAE have posted a video of the two leaders talking.

It is reported that other than the Chinese President, Qatari Emir, and UAE’s Crown Prince, state leaders from Ecuador, Tajikistan and Uzbekistan were also present at the gathering.

The UAE has not resumed diplomatic ties yet with Doha. Early last year, in January 2021, the governments of Saudi Arabia, UAE, Egypt, and Bahrain decided to end the four-year-old dispute with Doha.

In 2017, these four Arab countries snapped diplomatic and economic ties with Qatar.

While Saudi Arabia and Egypt resumed diplomatic ties with Qatar last year, UAE is yet to resume such ties with Doha. Except for Bahrain, all the other countries have however reopened trade and travel with Qatar.

The dispute which was dubbed as one of the most serious rifts in the Gulf Cooperation Council (GCC), arose from Qatar’s independent foreign policy stand, especially maintaining close ties with Turkey and Iran. Doha was also accused of supporting terrorism, which their government has denied.

In the past year, the UAE has proactively engaged with countries like Turkey and Iran in its attempt to realign its foreign policy goals defined by economic priorities.

It is reported that National Security Adviser Sheikh Tahnoun bin Zayed Al Nahyan, who is also the brother of the UAE’s de facto ruler, met Qatar’s Emir in Doha in August last year. This was the first such visit by senior leadership in the last four years after the dispute erupted