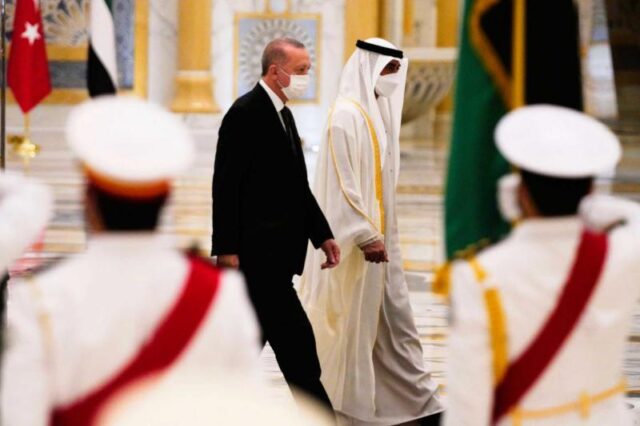 On 14th February 2022, Turkey’s President Tayyip Erdogan arrived in the United Arab Emirates to discuss and further enhance their coordination and cooperation between the two countries. Since 2013, this is the first time a visit like this has happened and this is just the way to mend the strained relationship. President Erdogan was greeted by the Gulf state’s de facto ruler Abu Dhabi Crown Prince Mohammed bin Zayed al-Nahyan. In November last year both the above leaders met when the countries signed investment accords worth billions of dollars. This visit will open a new, positive page in bilateral relations and the signing of 12 agreements in various fields ranging from media and communications to defence will help to take the countries on the path of a stronger and more stable relationship. Turkey is also all set to further advance their cooperation in the field of climate change, water and food security.

Both countries have been on the opposite sides of the Libyan civil war and in a Gulf diplomatic crisis and they have sparred over issues such as gas exploration in the eastern Mediterranean. But these issues were washed away when Sheikh Mohammed, the de facto ruler of the UAE took a visit to the country in 2012. The trip has been marked many times as the beginning of a new era for the relationship. In January of this year, both countries have also agreed to swap deals worth $5 billion in local currencies.

President Erdogan told reporters at Istanbul’s Ataturk Airport before he departed, “During this visit, we aim to develop the momentum we have captured with the United Arab Emirates and to take the necessary steps for ties to go back to the level they deserve”. Further stating “The dialogue and cooperation of Turkey and the United Arab Emirates carries great importance for the peace and stability of our entire region.”