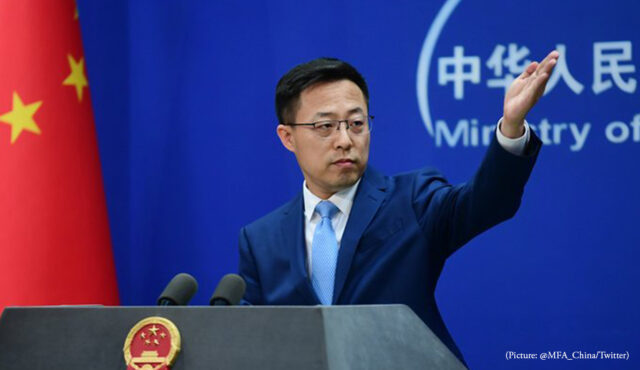 China’s Foreign Ministry Spokesperson Zhao Lijian said “To a man with a hammer, everything looks like a nail” in a statement to the press on April 15, 2021. He was responding to a media query regarding the United States (US) Director of National Intelligence’s statement calling China as an “unparalleled threat” to the US.

Mr Zhao Lijian said, “China is committed to the path of peaceful development. Never have we started a war or taken a single inch of another country’s territory. We pose no threat to any country. As facts have proven time and again, China always works to safeguard world peace, contribute to global development and uphold international order. China’s development means opportunities for the world.”

He further attributed such statements to the US intention to maintain its global hegemony “forever”. “The US intends to maintain its global hegemony forever and to dominate international rules, so it sees challenges and threats everywhere,” said Mr Zhao Lijian.
He further added, “In the era of globalization, forming ideology-based cliques to target others will undermine international order, get no support and lead to nowhere.”

On April 14, the US held a public congressional “Worldwide Threats” hearing for the first time in more than two years. US Director of National Intelligence Avril Haines and other heads of US intelligence services testified in the Senate Intelligence Committee hearing and expressed strong opinions on threats posed by Beijing. Ms Avril Haines described China as increasingly “a near-peer competitor challenging the United States in multiple arenas.”

“Given that China is an unparalleled priority for the intelligence community, I will start with highlighting certain aspects of the threat from Beijing,” said Ms Haines.

Answering a question on US military withdrawal from Afghanistan China’s Foreign Ministry Spokesperson Zhao Lijian said, “China’s position is consistent and clear. We hold that foreign troops in Afghanistan should withdraw in a responsible and orderly manner to ensure a stable transition and prevent terrorist forces from taking advantage of potential chaos to fester.”

He further added that the US is the “single largest external factor” in the Afghanistan issue and the US should respect Afghanistan’s sovereignty, independence and territorial integrity, safeguard progress made in peaceful reconstruction, and fully accommodate regional countries’ legitimate security concerns before making decisions and taking actions.