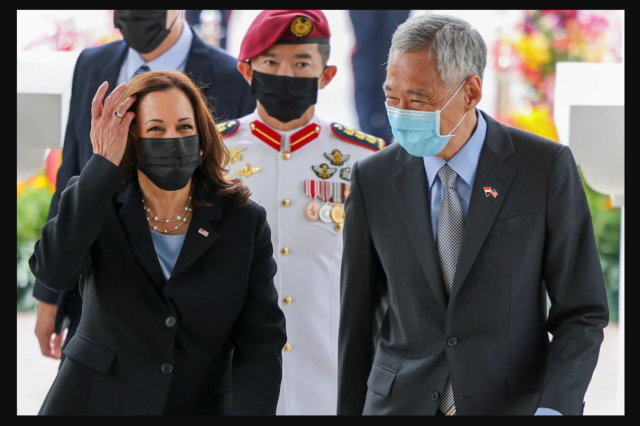 United States Vice President Kamala Harris’s visit to Singapore and Vietnam coincided with the collapse of the Afghan government and the attack which killed almost 200 people including 13 American soldiers. This is her first foreign trip outside America. During her visit, she met with the political leaders and sleek to assuage apprehensions of America’s reliability as an ally. The Biden administration has been receiving criticism for their withdrawal from Afghanistan and China’s approach towards Afghanistan are some major concerns. As per reports, with the Vice President visit these concerns can be seen to be answered.

Southeast Asia is home to more than 660 million people and has one of the fastest-growing developing economies. The region’s strategic importance also lies in its proximity to the South China Sea, a vital commercial shipping route where trillions of dollars of global trade pass through each year. By choosing these countries as the first official trip to Southeast Asia, the United States has shown its priority to regional security and economic opportunities in the region. The U.S. has a defence partnership with Singapore and is the largest foreign direct investor in the Asian financial hub. On the other hand, United States has a growing trade relationship with Vietnam, which is almost important to China’s vast territorial claims in the South China Sea.

In Singapore,  Kamala Harris met with Singapore President Halimah Yacob and Prime Minister Lee Hsien Loong and delivered a major foreign policy speech at Gardens by the Bay.  During the visit, she stated, “Our vision includes freedom of navigation, which is vital to us all. The livelihoods of millions of dollars in trade that flow through these sea lanes each day. And yet, in the South China Sea, we know that Beijing continues to coerce, to intimidate and to make claims to the vast majority in the South China Sea”. Kamal Harris also became the first Vice President to visit Vietnam. In Vietnam, she met with President Nguyen Xuan Phuc and shared common concerns about China’s bullying in the common maritime domain. She further stated that the U.S. did “not seek conflict” with Beijing, but it would “do what we can to make sure that we stay committed to our partners” on issues such as the South China Sea.

The visit can be seen Unites States attempt to deepen ties with Asian countries and also to counter the growing influence and aggressiveness of China. But as per many reports, this is also being seen as a major step towards the already worsening relationship between the United States and China.