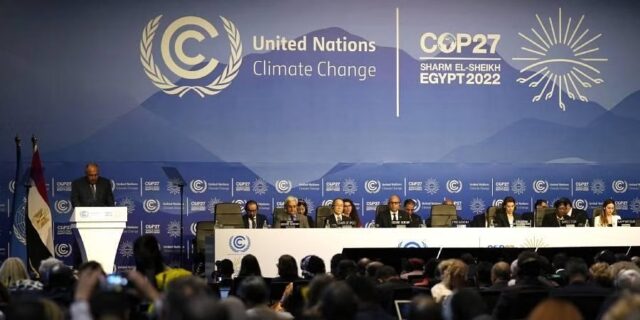 The COP27 summit of the United Nations kicked off this Sunday, November 6, 2022, in
Egypt. It is a year after extreme weather disasters triggered calls for wealthy industrialized
countries to compensate poorer countries. In the past few months, climate-induced
catastrophes have killed thousands, displaced millions, and cost billions in damage all over
the world. Because of the massive floods, devasted swaths of Nigeria and Pakistan were
evident; droughts worsened in Africa and the western United States; cyclones whipped the
Caribbean, and unprecedented heatwaves scorched three continents.
The conference is held in the Red Sea resort of Sharm el-Sheikh, and it comes in a fraught
year that is marked by Russia’s War on Ukraine, soaring inflation, an energy crunch, and the
lingering effect of the COVID-19 pandemic. Mr. Alok Sharma, the British president of the
previous COP26, expresses his views as he hands over the chairmanship to Egypt. “While I
do understand that leaders around the world have faced competing priorities this year, we
must be clear: As challenging as our current moment is, inaction is myopic and can only
defer climate catastrophe.” He also raised a question at the opening ceremony about how
many more wake-up calls the world and the leaders of the world actually need to make a
difference towards climate change.
By 2030, the world must slash greenhouse emissions by 45% in order to cap global warming
at 1.5 degrees Celsius above the late-19th century levels. If the earth warms beyond that
threshold, scientists warn that it could push the earth towards a hothouse state, which would
be unlivable. According to the findings unveiled last week, the current trends would see an
increase in carbon pollution by 10 percent by the decade’s end, and the surface of the earth
would be heated up to 2.8 degrees Celsius. The promises that were made in the 2015 Paris
Agreement, if kept, would shave off only a few tenths of a degree.
The Focus on Money
The COP27 will primarily focus on money like never before. It has become a major sticking
point that has soured relations between nations that became rich from burning fossil fuels and
the poorer nations suffering from the worst consequences of climate change. Simon Stiell, the
UN climate change executive secretary, said that developing nations have high expectations
for the creation of dedicated funding facilities to cover “losses and damage.”

The US and the European Union are fearful of creating an open-ended reparations framework
and have dragged their feet, which has challenged their need for a separate funding stream.
Antonio Guterres, the UN chief, has called for a “historic pact” to bridge the gap between the
North and South. He has recently said, “Our planet is on course to reach tipping points that
will make climate chaos irreversible and forever bake in catastrophic temperature rise.” He
further said that we need to move from the tipping points to the turning points for hope.