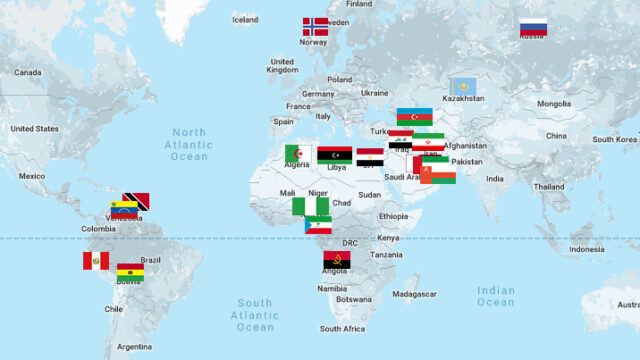 The Gas Exporting Countries Forum (GECF) is an international governmental organization that brings together the world’s leading gas exporting countries to a single platform and provides a proper framework for the exchange of information and experience among the members. The objective for the setup of this organization is to increase the level of coordination between the countries and also to bring more systematic collaboration. The Member Countries of the Forum are Algeria, Bolivia, Egypt, Equatorial Guinea, Iran, Libya, Nigeria, Qatar, Russia, Trinidad and Tobago, and Venezuela whereas countries such as Angola, Azerbaijan, Iraq, Malaysia, Norway, Peru, and the United Arab Emirates have the status of Observer Members.

The organization’s main aim is to support the countries over their natural gas resources and help them develop, preserve and use such resources for the benefit of their peoples, through the exchange of experience, views, information, and coordination in gas-related matters. This forum also provides a safe environment for the members to come, share their ideas and also have dialogues for better stability of supply and demand of natural gas in the global market. At present the forum represents 71% of the natural gas reserves in the world, market production stands at 43% whereas LNG exports and pipeline trade stands at 58% and 52% respectively. The forum is trying to enhance its objective and aims for further growth in the near future. It is also looking forward to increasing the number of members, especially the ones who share the same objective and interest. On 21st February, Doha the capital of Qatar hosted a two-day summit of the Gas Exporting Countries Forum (GECF). The summit was held despite the ongoing talks about restoring the 2015 nuclear talks as well as the Ukraine border issue. The summit saw the participation of Russia as well despite the growing conflict between Moscow and Kyiv. The summit also comes at a point when the US asked Qatar to help Europe with the preparation of emergency supplies as the tensions at the Ukraine border increase. The countries, however, have declared that if the sanctions against Russia affect Western Europe, they won’t be able to provide a substantial amount of gas replacement. Further, Qatar has discussed on and raised concerns that more investment is required to build up the gas infrastructure and thus, needs a long-term contract to be able to guarantee supplies to Europe. The rise in the price of natural gas and the affects due to the geopolitical changes were also discussed at the summit. The representatives from Russia however, didn’t discuss or even mention Ukraine but they have said that they are committed to the existing contracts and will abide by them.