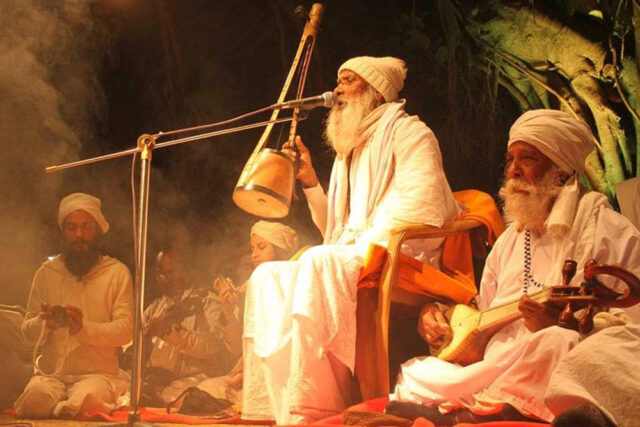 ‘Seek in man the beginning and end. Nowhere else in the world will you find it.

O brother! Cast off your customs and creeds of hate; the rules of the pious and texts of the righteous.

The real man is lost among rituals and sacred rivers.

The cataracts of caste and creed have covered our sight. And we are kept withheld in blindness fruitlessly. That man’s most natural self no longer sees the light. Say how can, it ever be realised without naiveness?

For contemplation, wisdom, love and delights of meditation are only mazes; except to the man who is simple; The fulfilment of adoration, and the nectar of feeling dwindle to nothing except for the man who is true.’ –A Baul song

The Bauls are known as wandering minstrels or mystic singers who are found mainly in West Bengal, India and Bangladesh. Edward C. Dimock is of the opinion that the word ‘baul’ perhaps emanates from the word ‘baula’ which means mad. Perhaps they are called so because of their zany style of dressing and their atypical way of searching for God. He opines that it is impossible to characterize all the bauls by one distinctive doctrine. Their philosophies are a collection of ideas picked up from a very wide range of religious systems. Often the threads from liberal schools of thought in Hinduism and Islam influence their convictions. However, those threads are not the only ideas which influence them. An individual baul’s personal handling of a variety of ideological threads weaves the final design of his songs and discourse. Their emphasis on individual effort to seek out God is too forceful and this makes it impossible to put all of the bauls in a single religious/scriptural category per se.  Even though some of the baul traditions do recognize the need for a guru/pir (spiritual guide) to initiate a fresh learner into the tradition, by and large they lay a lot of emphasis on personal interpretations of life experiences and observation. The latter trend amplifies their uniqueness.

Their free flowing ideas are presented as songs. The lyrics of their songs are easy to understand and relate to. They sometimes use the classic terminology of institutionalized religions in them. However it is meant only to facilitate the transmission of fresh notions and not the doctrines of the religion in which those terms were originally used. They typically use the ektara (one stringed plucked instrument) to give a musical background to their singing. Sometimes other instruments like the dotara (two stringed plucked instrument), nupur (ankle bells) and kartaljuli (finger cymbals) are also used. In current times more instruments may be employed to enhance the experience of the listeners, specially, if the songs are being recorded for a larger audience.  However the ektara remains to be the bauls’ musical instrument of choice in popular imagination. Scholars assert that the emergence of such free sub-groups from the peripheries of a cultural or religious system is caused by a gradual process of interaction and exchange with other cultural or religious groups. However, this process of intermingling and acculturalization is very slow and silent.  It goes almost unnoticed. That is why it becomes impossible to pin point an exact date and time for the emergence of independent thinking processes, which defy formalism of the very religion from which they had emerged. The bauls are not just confident but in fact proud of this independence. Lisa I. Knight did a comparative study of two individual bauls: One male; Jamal from Jhenaidah in western part of Bangladesh and a female; Rina from Birbhum in West Bengal, India. The former came from a Muslim family and the latter from a Hindu one. Despite the differences in their original belief systems they both emphasised on humanism as the ultimate goal of a searcher of God. They both were against rituals and sectarianism that divides humans into water tight compartments. Knight also observed that the bauls gave a lot of importance to lived experience of religiosity and spiritualism. They claimed that they drew inspiration from the Bartamaan (present/here and now/self-realized), while the followers of conventional religions, relied on Anumaan (speculation/guess-word, narration of experience of others). They are proud to have the liberty to understand truth against the backdrop of their own everyday circumstances and not against the narrative of some distant and historical past.  They consider rituals as chains that tie the human soul and discourage it from searching for God. In a way the bauls are rebels against the orthodoxy and orthopraxy found in all religions. For them humanity is the only way to reach close to God.

‘Why do you waste your time casting nets, O’ fisherman, for minds?

O’ You! Absent minded one! You stay on the shore, while the Fish is in deep water. You want to catch it with your devotion. But you have not learnt to cast the net right. The net instead of spreading out, tangles up on touching the water. All you can do is shake the net and clean the shells. It’s all you end up with. Oh absent minded one! The net has sixty-four ends, not one’.

In the above song the fish which the fisherman is looking for is God. The fisherman would have to dive to the deepest core of the ocean if he wishes to find that ‘Fish’. The tangles in the net signify worldly distractions. The sixty-four ends of the net signify the complexities and challenges involved in finding God. For a baul following emotionless rituals means, casting the net in the shallow waters while the Fish resides in depth. According to them service of human beings is the greatest service of God. In fact love for human beings is the best way to express love for God.

In the research of Knight, both the bauls; Jamal from Bangladesh and Rina from India shared common ideas on issues of non-formalism, non-sectarianism, humanism and gender justice etc. Jamal felt that all women should be respected as one would respect a mother. Rina was proud of her female gender and was happy to be identified as a ‘baulini’ (a feminine term for baul). They felt the need to fill the emotional vacuum in people’s heart with love for all. They both believed that all human beings are created equal and are the same. All kinds of differences; ethnic, racial, religious, regional, caste and class etc. are constructed by men for selfish purposes. They are false.  Jamal’s views on such differences, is worth citing here:

His observations emphasised the transitory nature of the world and the resultant futility of being selfish or greedy. Indeed Jamal and Rina were both right in thinking that despite the outwardly differences which we easily notice we are all one. The colour of the liquid that oozes out from a cut on the human body is always Red. It does not matter which state, society, religion, culture, race or ethnicity that body belonged to. The Red of the blood of each and every body reminds us that there is something greater than the visible marks of identification which binds all of us with each-other. That in fact is the chain of humanity and spiritual sentiments which cut across all religions and regions. This shared culture of a frenzied search for God in serving human beings bedecks the philosophical treasures of both India and Bangladesh. The sweet words of a baul song celebrate the theory of universal love and the melodious sound of the ektara makes the heart dance to the tune of hope.